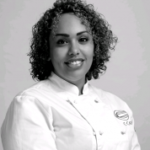 Bethania chose Restaurant DANIEL as the location for her four-month stage from August to November in 2015. Her role as a pasta production cook allowed her to collaborate with the chefs de partie in the kitchen to make sure that everything was prepared for service.

Why did you choose to stage at Restaurant DANIEL?

I chose Restaurant DANIEL because I know that it is one of the best restaurants in the country and I know that by working here I could learn so much more than what I have learned in the previous seven years of restaurant and kitchen experience. I wanted to learn from the best of the best and I knew that this training could catapult my career and have my peers take me more seriously.

What did your job as a pasta production cook entail?

When working on the pasta station I was solely responsible for making sure that the restaurant had what they needed for service, weather it be grissini, fettuccine, kombu salt dough, cook short ribs, cooling stocks, pasta sheets, spaetzle, or clay sheets. I worked directly with the chefs de partie from the restaurant and worked on what they needed for their stations to be able to perform service successfully. The meat station usually needed the most from the pasta station but of course Chef Eddy Laroux and Chef Jean Francois Bruel were constantly changing the menu. In the three months that I worked the pasta station during my internship I made them the pasta sheets, spaetzle, rabbit ravioli, clay sheets, cleaned and steamed grape leaves, cooked short ribs, and watched and reduced stocks and sauces.

What were the most valuable lessons you learned while working at Restaurant Daniel?

My experience here at Restaurant DANIEL has taught me first and foremost to be patient. There are a lot of people there whom are full of knowledge and experience and are really excited to show you how to do something the right way. Many times I would hear how to do one thing many different ways from many different chefs. It was my job to find the right way and also respect the other opinions of my fellow chefs. Another important lesson learned here at Restaurant DANIEL is to be mentally prepared to deal with working very hard for very long hours and many many days straight and all the while keeping a good attitude for yourself and your peers. Above all else I learned about endurance. Keeping up with the boys is hard but necessary for a female chef. Coming in on days when you feel like you just can’t anymore and coming in as if nothing is wrong, because your fellow chefs are in the same boat as you. As far as technical skill comes into play, I definitely learned a heck of a lot. There are also a lot of things that I’ve learned in my years previous to the program, that I learned to be more precise, learned to do it cleaner and faster here in the program. So in a way working at Restaurant DANIEL with the ment’or Program sharpened my skills.

As of right now I have been moved upstairs to the restaurant and I am now Chef de Partie of the Canapé station. I am very happy to be working this station because it provides enough reward and enough challenges to keep me satisfied. I get to sometimes collaborate with Chef Jean Francois for the next canapé--he often changes them every three days. Recently the person that I trained on the pasta station quit and I had to step in, so the past three weeks I have been between Pasta and Canapé. In the past three months I have been moved to a few different stations: first after pasta I was placed in banquet, helping the chef execute dishes and plating them and handling canapé, then when the holiday season was upon us I would work one or two days a week with Feasts and Fetes, which is the catering company run within Restaurant DANIEL. 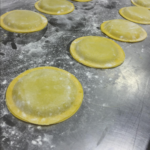 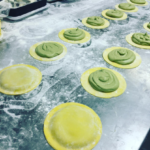 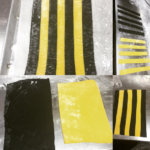 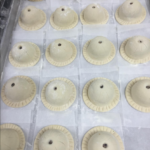 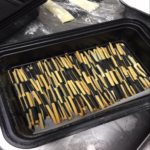