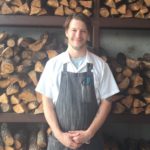 Bradley Nicholson chose to stage at Amass in Copenhagen, where he worked in each section of the restaurant, including the garden. He also had the opportunity to work at an off-site event with the Amass team.

What were your first impressions of Amass?

As soon as I arrived, my ideas about what a successful restaurant can be were immediately challenged. I was warmly welcomed by Chef Matt and his team. They explained that their mission is to make delicious food by sourcing responsibly, utilizing whole ingredients, wasting nothing and challenging their contemporaries to do the same. Early on, I learned that getting a job at Amass is very difficult because they have nearly zero employee turnover, so I was very fortunate to have been able to work there.

What type of work did you do in the kitchen?

I worked on the hot section for the first two weeks, which meant creating many different pieces of mise en place for the three dishes from the hot section of the menu. In addition, the chef de partie was responsible for having mise en place ready to cover the many dietary restrictions that restaurants must accommodate almost every night.

Next, I worked in the garden for two weeks and spent most of my time transplanting small herbs and greens which had been grown in the restaurant's on-site aquaponic greenhouse. I began each day by reading the list that had been made the night before by the chef de partie and then walking through the garden and picking the largest leaves, allowing the smaller leaves to mature. Soona, the garden manager, taught me how to pick each plant without damaging it, and she showed me where to pick them from in order to encourage new growth. After the herbs were pulled and dried in the spinner, they were labeled, packed away and given to the chef de partie.

After that, I went back into the kitchen and worked with the pastry section. The desserts at Amass are simple pairings of fresh and bright flavors. One of my favorites was a beet sherbet with fermented grain streusel and rhubarb cream. The beets are roasted in coffee grounds from the previous service, juiced and made into a smooth sherbet using a paco jet. This interesting and delicious dessert is extra-special because it utilizes an ingredient (the old coffee grounds) that would normally be tossed into other restaurants' trash cans.

During my next two-week block, I worked with Jens, a sous chef, and Michael, who made the restaurant's bread. Each morning, I would begin working on basic mise en place and help receive orders and put them away. Throughout the day, I would help out wherever I was needed. Most of the time, that meant peeling and trimming asparagus. Asparagus grows particularly well in Denmark, so it is an important ingredient at Amass.

My final assignment was doing prep work in the cold section, which included pressing almonds for milk and dicing snails for beef tartare.

Which dish stood out to you the most?

My wife and I had the pleasure of dining at Amass during my last week as a stagiaire. If you ever have the opportunity to eat there, you will must try their grilled potato bread, which is made from fermented potatoes. It is the most delicious and unique bread I have ever had in a restaurant. It is chewy but not dense, and the sour flavor of the potatoes, which are mixed with creamy almond ricotta, seems sort of familiar, yet entirely new. The bread tastes like a sour cream and onion chip, but is much more substantial and more mature in technique and flavor.

What was it like working off-site with the Amass team?

My final days at the restaurant were spent preparing for an off-site event in southern Denmark that was approximately a two-hour drive from Amass. The staff and I stayed up all night prepping food and carefully packing plates and tools onto a tour bus. We prepared three services for 30 people each time in a secret garden located on a very large property once owned by Danish royalty. The three services were every bit as precise as they would be on any given night in the restaurant. There were no shortcuts to make up for our level of unfamiliarity with the outdoor kitchen. The ice cream was spun to order, and each dish was plated with precision. The entire experience felt true to the spirit of Amass. We were all exhausted when we left that evening, but I stayed awake for hours packing and reflecting on the past two months. I got to live out one of my dreams. I made new friends and learned many new techniques. I felt like I was truly a part of their team. I think about Amass every day, and I will be forever grateful for the time I spent there. 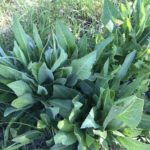 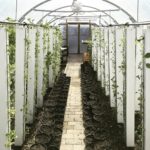 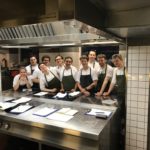