Brady staged at Chambre Séparée in Gent, Belgium. Brady has a passion for over the fire cooking he wanted to continue to explore along with an interest in fermentation.

I have always been fascinated by cooking with live fire. It is one of the reasons I moved to Charleston to cook at Husk. When I discovered that Kobe Desramaults had opened a temporary restaurant focused on live fire cooking and fermentation, I knew that I wanted to experience it before it was gone. Since I started cooking professionally, I have heard chefs in America talk with reverence about Kobe Desramaults, his food, and his first restaurant, In de Wulf. At Chambre Séparée, I was able to witness open fire cooking techniques as well as many interesting forms of fermentation translated into the context of a fine dining restaurant.

At Chambre Séparée, there is only a small team to complete the prep for a large tasting menu. Because of this, everyone wears a lot of hats. During the day, my tasks included prepping langoustine, cleaning sea urchin, shucking scallops and oysters, cleaning sepia, cleaning whelks, as well as doing basic knife work for my station. At night, I worked on the snack station with another cook. The first five to six courses on the menu were snacks that came in quick succession and were eaten with your hands. This always included a caviar course that was set up on my station but prepared table-side by Kobe. Also, the front of house staff consisted of only two sommeliers, so during service I was responsible for clearing tables, running dishes, and explaining courses to the guests.

The menu was reprinted every night and almost always included multiple changes. Kobe was constantly tweaking things even during service. Every service at Chambre Séparée was unique. One example of the ever-changing nature of the dishes on the menu was the sea bass dish. One week, Kobe put sea bass on the menu that had been dry-aged for 7 days. He served this just barely cooked, sprinkled with sake-infused salt. On the side was grilled butter radish, which had been wrapped around an emulsion of cured sea bass roe and smoked rapeseed. The next day he added a slice of the liver that had been soaked overnight in sake and then grilled lightly; the fish was then served raw with the sake salt. When the fish had been butchered, he hung the carcasses over the fire to smoke. The next week he made a dashi-like broth using the smoked and dried fish carcasses and poured it table-side over grilled honey mushrooms. A few days later, the “dashi” was used to poach baby turnips that were served again with the sea bass. In this way, one product in Kobe’s hands was turned into four unique dishes within a two-week span.

During my last few weeks, I had the opportunity to take on the responsibility of prepping and assisting Kobe with one of his signature dishes which was a “Corne de Gatte” potato cooked in a crust made from salt and ash, served over smoked potato puree with black truffle. The process included making a dough from salt, flour, water, and ash from the previous night’s fire, then cutting the small potatoes hasselback-style, wrapping them in the salt crust, par-baking them in the gas oven, and finishing them in the wood-fired oven. Once they were cooked, I would cut the crust open and arrange them in the serving dish for Kobe to finish table-side. The potatoes took about thirty minutes from start to finish. I enjoyed being ultimately responsible for the success of this dish. Timing had to be perfect. Start the potatoes too early and they would overcook while they waited; start them too late and the diners would be left waiting.

The grant from Ment’or gave me the opportunity to travel and stage in Europe, which has always been a career goal of mine. I feel very fortunate to have worked under Kobe even if for only a brief period of time. His courage and creativity will always be an inspiration to me. I am very grateful that Ment’or gave me this opportunity; working at Chambre Séparée has given me the confidence to continue growing in my career. 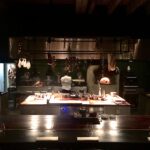 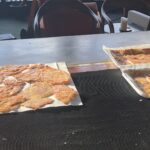 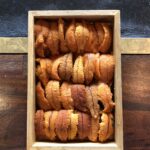 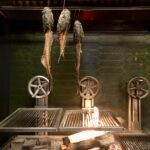 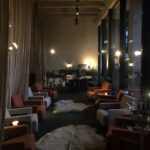 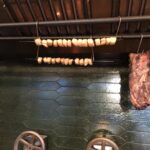