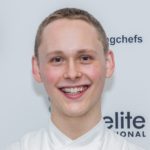 Brendan staged at Atera in New York. While there, he fell in love with Danish food and found inspiration for his future while working with Chef Ronny.

What made you want to stage at Atera?

I wanted to learn about new food preparation methods and work with unfamiliar ingredients. Atera is very big into fermentation, which I was interested in, and I wanted to work with Chef Ronny, whose background includes competing in the Bocuse d’Or. I knew that spending time at Atera would make me a better chef.

What type of work did you do at Atera?

I was able to try out so many different roles in the kitchen, from prep to service. I got to experience every station. One of my favorite parts of the job was the way that Chef Ronny would encourage everyone to generate new ideas. It didn’t matter if you were the sous chef or an intern still in school. He was always looking for new ideas. The team at Atera was very supportive, and they let me use their produce and their kitchen. They would give me feedback and really helped me to grow both as a cook and as a person. While I was interning at Atera, I was also training for the ment’or Commis Competition. I would come in early and on my days off to train.

What did you learn during your stage that you will use in your career going forward?

I learned a lot about molecular gastronomy and became familiar with Danish cuisine. I enjoyed working with new ingredients and using new techniques, such as fermentation, curing and preserving. My experience was about refining my skills and techniques. I have grown as a cook, and the team really pushed me to be so much more organized, clean and refined in all aspects of my cooking. Additionally, I made a lot of fantastic connections through my grant and through the competition.

I truly look up to Chef Ronny and, one day, I hope to be like him. He has worked in some of the best restaurants in the world. He has a family and a restaurant with two Michelin stars. It is my dream to live a life like that one day, and having him as a mentor is a great start. 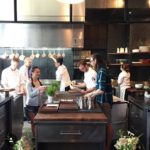 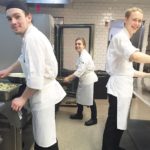