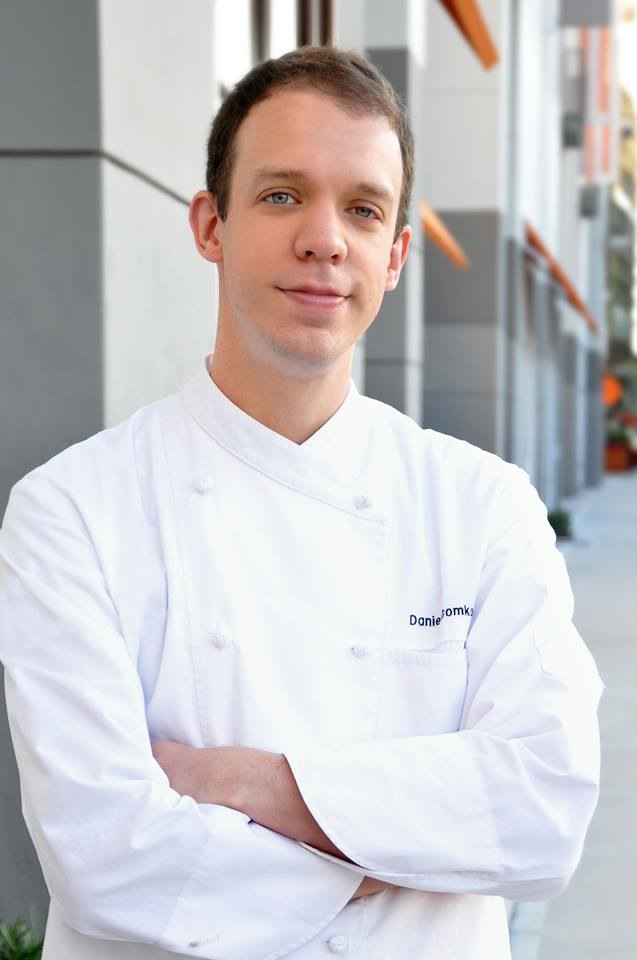 Daniel chose to stage at Jacques Torres Chocolate at their production factory in New York so he could learn more about the French "art of the chocolatier." His stage allowed him to see firsthand the technical skills and production processes necessary for producing high-quality chocolates, ganaches, and confections in large volumes.

What made you want to Stage at Jacques Torres in New York?

There are many excellent chocolatiers that I could have stood to learn a lot from, but I chose Jacques Torres based on the high volume production at his facility, without sacrificing the French "art of the chocolatier."  At a smaller facility, I would never have had the sheer repetition that allowed me to cement the fundamentals I wanted and to have a chance to understand the full process and reasons behind every deliberate step. The chef's success at introducing and convincing his American clientele that French style chocolates were something that they both wanted and were willing to pay for was something worth learning in of itself. When Chef Torres and Chef Goto started out, few pastry chefs in America were offering such an uncompromising French delicacy, and the chefs carved out a place in the middle of NYC (a very competitive environment) to achieve their goals.

On a more personal note, Chef Torres is a chef I have respected for a very long time.  I grew up watching his television show "Passion for Chocolate" well before I had an aspirations for entering the pastry world.  Even his show was uncompromising - food television was made for home cooks in that time, and he would introduce advance techniques and large scale projects with a simplicity that made it sound as if, with a little work and effort, you could actually accomplish them at home.  I encountered him personally during my time at Disney, when I met him during a demo at EPCOT's Food and Wine Festival. That same calm patience that he put forward didn't take a thing away from his professionalism and knowledge, and through just a quick demo I realized that he was a really great teacher.

Can you describe what you did during your Stages?

Chef Ken Goto, Jacques' business partner, ran the daily production of the chocolate shop most of the time. Starting out I mostly worked for Paola.  She introduced me to Chef Torres' color palette and decoration techniques, and coached me through the molding process and equipment functions. Much of the equipment was familiar to me, though a far larger scale than I was used to. Machines that I was trained on running included the one-shot, coating tumblers, Mol d'Art tempering wheels, tempering kettle/depositors, various enrobers, cooling tunnels, a variety of packaging machines, a large-scale roaster, a conching machine, glacier equipment, and equipment to make large batches of slab ganache.  There was a huge focus on productivity and cost margins, and both Chef Goto and Chef Paul (the PM pastry chef) took time to explain precisely why certain things were done and what these small adjustments meant for both end product quality and food/production costs.

Starting out in JTC, Chefs Paola and Paul were very quick to introduce me to all the standards and procedures followed in the facility.  I worked alongside each of the machine specialists and got a chance to figure out the daily workings of each piece of equipment to accomplish their various functions.  Next, I was trained to assist directly with more specialized events and production.

First was events.  Chef Torres had a large number of fundraisers and other events he attended that featured his chocolate line, holiday specials, or demonstrations.  He and Chef Ken took me along to all of these during my three months there and I learned a lot from the setup, transportation and running of these events.  I assisted Chef Torres in the building and decoration of his chocolate showpieces for these events, six pieces in total, where I was coached in design, practicality, theming, and most importantly to Jacques, style.  The setup for the events offsite was another major learning experience as well. Next major learning experience was mold making.  Chef Goto took the time to take me through how chocolate molds were designed for JTC, and let me make most of them for the time I was there.

Finally I was given a chance to focus on technical specifications while at JTC.  From having standardized large batch recipes that followed an exact industrial scale procedure to the maintenance of the equipment it was produced on, I was able to explore the steps necessary to preserve the integrity of artisan chocolate made in large batches.  For example, Chef Torres wanted a chocolate chip cookie with far larger chunks than just a standard "chip" found in most cookies, so had repurposed a fast-food beef patty cutting machine for his dough, so that he had a strong and powerful enough blade to cut through the chunks and producing the large volume needed, without damaging the equipment.

My experiences at JTC and Chef Torres allowed me to explore an area of pastry I would have difficulty otherwise fitting into my career path.  Although I do not have interest in opening a large scale chocolate production facility at that volume, this experience allowed me to see the results of a well organized large scale system. Small, dynamic groups with a team leader allowed for an excellent production flow. Furthermore, I gained a much deeper understanding of the workings of chocolates, ganache, and confections, to the point where I am now better at explaining it to people of all skill levels in order to enrich my staff's knowledge, which only helps to make the daily production at work easier.

For my artistic skills, I was capable of taking on my first chocolate sculpture competition.  Chef Torres taught me how to assess a theme and bring in my personal vision to start coming up with an idea for how I wanted to build a sculpture that was both functional and beautiful.  While I still encountered challenges in the end execution during this contest, he also went over enough ways to evaluate a partial success to figure out where things could have been improved, and since then I have been able to better execute finished projects far larger than I had before.

Finally, my conception of what can really be done in a chocolate shop at any scale was completely overhauled.  I learned to make molds, fix equipment, construct temporary production stations to maximize efficiency of groups, and evaluate product through all stages.  It is one thing to produce an excellent ganache based on a good recipe and good procedural techniques, but with my new knowledge I can now take ideas I have in my head and turn them into a finished product without the assistance of a chef. This significant barrier means that I can propose a chocolate line, carry out VIP orders without assistance, or even bring in staff who are unfamiliar with a product and still produce high-quality results.