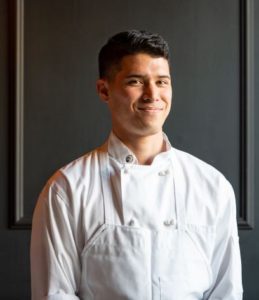 David staged at Kagurazaka Ishikawa in Tokyo, Japan. David wanted to  learn more about the food of his culture and connect with his roots.

My name is David Yoshimura, and I was born a Japanese American in Houston, Texas and this year I traveled to Tokyo, Japan to stage at Kagurazaka Ishikawa.  My entire life I have always identified as being American, in fact my Japanese father growing up would brush off our heritage and promoted my “American”-ness in hopes I would fit in and succeed in the USA.  However, there was never a day I was more curious about my Japanese heritage and the cuisine that derived from it.  Food has always been an expression of who I am and with the help of the grant from Ment’or BKB, I was able to learn more about the food of my culture. Not only have I been able to travel abroad and further develop my craft as a chef, I have also further developed my connection with who I am.

Kagurazaka Ishikawa is a three Michelin starred Japanese restaurant in Kagurazaka, Tokyo.  I chose to stage at this restaurant because the cuisine at Ishikawa is traditional Washoku style food.  Washoku has been described as the “home-cooking” of Japan, but at its core “Wa” means Japan and “Shoku” means cooking, so you may call it authentic Japanese cuisine.  Washoku differs greatly from Kaiseki or sushi, which many people associate Japanese food with.  Washoku style food involves a wide variety of cooking techniques, knife skills and clever use of umami, all of which Ishikawa excels at.

Ishikawa Restaurant is relatively small, with about 20 seats and serving around 45 people a night.  Given the size of his restaurant, his success in Japan and an international level is something not to be taken lightly.  Ishikawa has expanded greatly in the last decade and has a number of restaurants throughout Tokyo.  Most notably, he has two other restaurants that stand out: Kohaku, a three-star Michelin restaurant down the street from Ishikawa, and Ren, a two-star Michelin restaurant located in Ginza.  Upon arriving in Tokyo, I met with Ishikawa-san was warmly greeted and asked which restaurant I was wanted to work at.  I chose all three, three weeks at each restaurant.  Ishikawa-san laughed and approved and my training started the very next day at Kohaku.

Kohaku is run by the first apprentice of Ishikawa, Koji-san.   Koji-san’s style of restaurant is very similar to Ishikawa from a broad perspective, however the cuisine and Koji-san himself are a just a little more subtle and clever than his predecessor.  For the most part my daily roles included basic prep work involving knife skills and making dashi-based stocks which is a lot harder than one might think.  Kohaku’s food is very traditional and much of the building blocks and preparation of the cuisine reflect that.  For example, every day, I myself and another coworker would shave katsuobushi right before service to make Ichiban dashi to be used in soup for an upcoming course.  This practice is almost completely lost in most modern Japanese restaurants who use pre-shaved katsuobushi in their dashi.  Furthermore, any vessel to be filled with a liquid was rinsed first with dashi and discarded.  Another great lesson learned at Kohaku was proper Japanese kitchen basics mostly cleanliness. Smelling cutting boards, knives and even your own hands for any trace of smell is taken very seriously. The practice is a simple one, but eradicates the chance of any trace of soap or past food use.  When cutting any food, the knife hand absolutely never touches food, for the sake of keeping a clean work environment and body.  On the subject of cleanliness, I forgot to mention that everyone at Kohaku and the Ishikawa group in general is required to shave their heads upon employment for the sake of cleanliness.  Luckily, they had spare hats available for stages such as myself.  During service, I proved myself able to work the simmering, or “Nimono”, station which involved making “Kuzu-giri”.  “Kuzu-giri” is a very interesting cooking technique where noodles are made from Kuzu starch and cut to order.  Overall, my experience at Kohaku covered the basics of Washoku cuisine and was very hands on.

The second restaurant I attended under the Ishikawa group was Ren.  Restaurant Ren is Ishikawa’s third restaurant ran by Jun Mishina, a man of few words with extraordinary skill.  The size of the restaurant and restaurant team are very small, hosting about 25 people a night with only 5 employees!  That being said, the skill level of each employee is very high and I was lucky enough to contribute to the team in many ways, while learning in the process.  At Ren, the cuisine reflects what Jun-san likes to eat seasonally, through a Washoku set menu.  For instance, the follow up to the final course of rice is a bowl of Japanese curry, extremely humble and also extremely delicious.  With such an intimate team, I was able to really learn the finer details of Japanese cuisine, the why’s and how’s which I was not able to examine at Kohaku.  At Ren, the sous chef Kousei-san reluctantly taught me Japanese knife skills and grilling basics.  Because of the small size, I was even allowed to serve and cook for foreign guests who spoke English.  At Ren, it was my honor to feel like part of the team and hone my skills learned at Kohaku.

Concluding my time in Japan, my final stop was restaurant Ishikawa itself.  This beast of a restaurant is still graced by Ishikawa-san every night, and is a proving ground for young Japanese chefs.  Ishikawa-san commands his restaurant with a fiery spirit and is reflected through his still lively food.  Compared to the cuisine of his “Kohai”, the food at Ishikawa is very masculine and straight forward.  When you eat the “Sakizuke”, or starter course of lobster, the flavors are in your face and scream fresh lobster with complementing back tones.  It was here I learned the importance of complete utilization of ingredients.  At Ishikawa, almost nothing is thrown away and taken for granted.  All the scraps are somehow re-augmented to make the food taste more like… itself! If there are un-usable food scraps, they are used for family meal.  Another important I noted, is that at all of Ishikawa’s restaurants they practice of the idea of “Omotenashi”, which is the idea of complete and total hospitality towards the guest experience.  What this means is that the chefs are also the servers, dishwashers, reservations, and hosts for the entire experience.  There is no separation of job duty at the Ishikawa group, they do it all!  This was a lesson that I am very grateful to have learned in Japan.  Another important lesson I absorbed at Ishikawa was the importance of the spirit of a restaurant.  Ishikawa-san himself has enough moral and charisma for 100 restaurants, but he chooses to inspire his young employees every day and instill excitement about working there.  He also gives plenty of time off with many quarterly bonuses.  Every two months he throws a joint birthday party for anyone who had birthdays during that time. Every month there are optional company field trips to farms, sake tastings, or restaurant get togethers.  Not only that, but he rents out a couple apartments in the area to his new employees at a discounted rate, which I had the pleasure of staying in myself.  Beyond the food itself, the lesson of true hospitality I learned as Ishikawa is something I will never forget and hope to replicate in America.

The two months I spent in Tokyo flew by like a dream, a dream given to me by the Ment’or BKB grant.  In my application for the Ment’or BKB grant, I confided my reason for choosing Ishikawa Restaurant over others:  upon returning to the USA, I hope to soon use my skills learned in Japan to open a Japanese American restaurant. Currently, I am the chef de Cuisine at Californios restaurant in San Francisco, a restaurant where I constantly change the menu.  After my experience at Ishikawa, I will certainly use some of the techniques learned abroad at Californios.  Before departing to Tokyo, I hosted a series of Pop Ups in my home of San Francisco under the name of “Ojisf” which featured my style of Japanese American cuisine.  However, after learning my roots and the building blocks of Japanese food, I am certain the skills I bring to my future endeavors will be even more delicious  and authentic than ever before.    I am grateful and humbled to have received the Ment’or BKB grant for 2019, and will never forget the opportunity I was given.  Thank you. 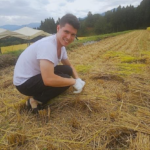 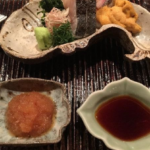 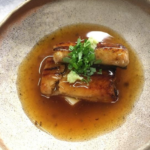 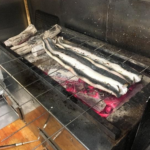 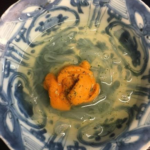 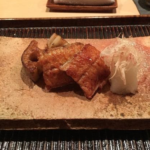 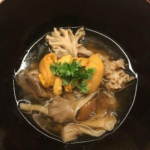 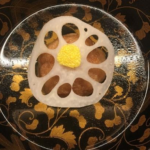 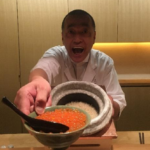 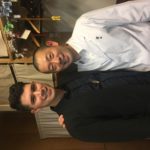 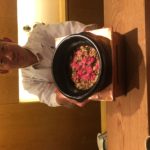 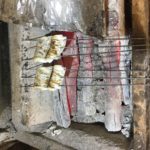 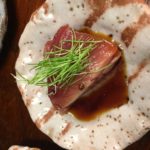