How did you become interested in doing your stage at La Maison Troisgros?

One of my goals was to enhance my knowledge of French culture and traditions. I had been working in a traditional French kitchen in New York City for five years and had learned many things, such as braising meats, making sauces and roasting and poaching fish. However, I wanted to work in France so I could learn more about traditional methods of French cooking that are not common in the United States. I was looking for a restaurant that focused on French classics, but also had a modern touch. After doing some research, I found La Maison Troisgros, a renowned restaurant in Roanne, France that is currently run by Michel Troisgros and his son Cesar. The restaurant focuses on nouvelle cuisine characterized by lighter, more delicate dishes.

What was your experience staging at La Maison Troisgros like?

On my first day there, I was assigned to work on appetizers and helped prep dishes such as sardines and white asparagus. After the third day or so, I was able to help plate all of the main courses. It was sometimes difficult for me to communicate with the rest of the staff since I didn’t speak much French. The kitchen was extremely quiet. The chefs even had tally marks for anyone who made a loud noise, and whoever marked the last one for the day, had to pay twenty Euros.

To be honest, the techniques at La Maison Troisgros were not really all that different than the ones I had experienced in the U.S. If anything, it seemed that their methods and steps for the recipes were a bit more concise. I was surprised to learn that most of the restaurants there do not sear meats as hard as we do in the U.S. Most of the chefs that I spoke to explained that the quality of the beef in France was not as good as it is in the U.S. They said that the meat is tougher and drier and lacks flavor. For these reasons, they sear the meats in butter and herbs, almost like a poach.

During my time at La Maison Troisgros, I was able to work in different departments, such as pastry, and also at the sister restaurant, Le Central. Working in the pastry department was actually my favorite role, in part because the pastry chef spoke English and was actually able to explain recipes, procedures and different techniques. He showed me how he made his ice cream, and we both agreed that there was no comparison to how we make it in the U.S. The ice cream and most of the pastries were delicious.

Did you achieve what you hoped to achieve during your stage?

I believe I achieved a tremendous amount. I found what I needed to help me continue on my path to becoming a great chef one day like my mentors. I came back to my restaurant with great knowledge to share. Each day I observed something different, and not just about the food, but also about the service and teamwork. I feel that I learned so much about the integrity, passion and efficiency that is necessary to run successful restaurants like these. I realized that there is always something that can be improved upon, and that you should always be striving to make things better today than they were yesterday. I now understand and appreciate how much Chef Daniel has brought to his restaurants in New York from France in terms of technique and philosophy. My stage was an experience that I will always remember and value. 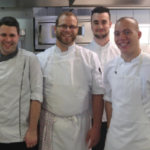 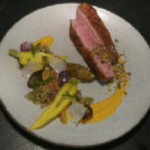 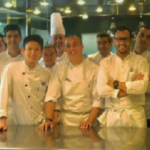