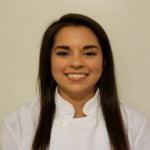 Emily had developed a true passion for breadmaking by the time it came to choose where to Stage. She selected Meyers Bageri in Copenhagen, Denmark, where she spent weeks perfecting new techniques and was exposed further to the art of pastry.

What made you want to Stage at Meyers Bageri in Copenhagen?

I was drawn to Copenhagen because it is known for having the most Michelin Starred restaurants in the world. From cuisine to pastry, coffee to bread, the food scene is known as impeccable. I had been studying bread in depth for over a year, and I knew that Meyers Bageri would be one of the best places to study to newfound passion. After Staging at Meyers Bageri, I can say that it does not fall behind in its ability to wow its audience, and uses only the finest, all organic ingredients to produce flawless bread and pastry. I knew that this was the place where I had to be.

My first two weeks at Meyers were spent on the viennoiserie station. Learning to expertly laminate, fill and shape the pastries was a new experience for me. Since the majority of my studies had been mostly with savory breads, learning the delicate art of sweet pastry in a place like Meyers was a true privilege. I learned that Danes loved the spice cardamom, and incorporating this complex and earthy spice was a well loved addition to Meyers’ pastries.

After viennoiserie I was moved to the mixer where every dough and filling was made. Working with an industrial sized mixer proved to be the most laborious of the stations. Due to the high demand for Meyers’ product, the mixer and I were constantly moving. Every ingredient played a significant role: add flour, water, salt, yeast, and repeat! Claude Meyers is part owner of the all organic flour company where the Bageri gets all of their flour, and there were several levains for the different types of breads, giving a variety of consistencies and qualities to each loaf.

After my bouts with the mixer I moved onto the final and most exciting station, baking. I couldn’t wait to do the bake to see each product come to life in the ovens. All of the dough is made the day before and placed into large containers for the morning baker. When morning would come, the dough was rolled out to the prep station closest to the oven for the baker to shape and weigh. Each flavor of bread was made into full sized loaves and bollers (individual loaves). Though the rest of the city was still in bed, the Bageri was full of energy and already finishing the bake before opening!

Working with a small, but effective and efficient team was very different than what I was used to. By comparison, American kitchens are generally much larger. Though this had its challenges. For instance, if I wanted to use the sheeter but the baker was in the middle of taking bread in and out of the oven, all I could do was wait. The demeanor of the staff was hard working but relaxed. It was low stress and the bread never suffered for it.

I learned so much about different methods and types of flavors (cardamom and cinnamon especially) that are highly sought after in that particular part of the world. With an elevated hydration, the bread comes out more flat and mild than the breads I was used to making. Some of the different methods and techniques used at Meyers have already affected the way I shape, flavor, and handle my breads back home now. My biggest takeaway was the realization that natural yeast is resilient. I have always been delicate when handling my dough, but working at Meyers has taught me to not be afraid of damaging but to handle and get to know and appreciate my bread even more. 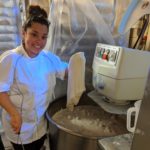 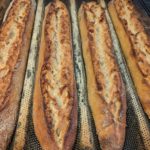 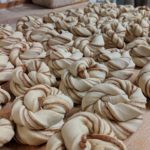 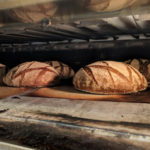