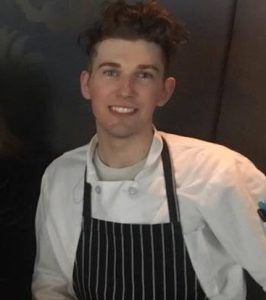 Grayson staged for one month at The French Laundry in Yountville, CA and learned the intricacies of this famous kitchen and gained better clarity on his career path.

Are you giving everything you’ve got? I’m always asking myself that, I don’t know if it’s the caffeine buzz, or dehydration, or the person working next to me, but I tell myself to give more. I enjoy striving to be better, to take the extra step or to get the extra repetition in. I do this because I’m competitive, because I want to be better than the person next me.

Every foodie owes it to themselves to visit the holy land. The French Laundry is that Mecca, and I needed to have the experience of standing amongst other cooks feeling the rush of being under pressure. We’ve all felt the aches and pain or it just being a crap day, but once the lights go on and the team comes to life, and the smell of grease gets in the air, forget it. There's just nothing like it on earth. The adrenaline kicks in and your chest expands, and you forget all about that. The day starts and everyone gets into their opening routines, I knew before I received the grant that I needed to cook at The French Laundry.

Opportunities are a chance to work hard and talent is measured by obsession. The opportunity the grant program provided was a one month immersion at The French Laundry. I had no expectations for the work I would be doing, but that the work would represent me. The discipline I demonstrated during my experience was ultimately an extension of how I work each and every day. I don’t think I could have just decided to cook at that level, it was the opportunities given to me by my mentors throughout my career.

My journey began at The French Laundry as a commis, arriving at six in the morning on a friday, I quickly learned the responsibilities of being on the commis team. The day begins with setting up the line; this included filling oil bottles, distributing salt, pepper, and C-fold towels. We then folded and distributed towels and aprons for the entire team. We received bread from Bouchon Bakery as well as reviewed the produce order, which would be arriving shortly. After set up we gathered as a team to discuss the distribution of the commi tasks. The chef de partie would determine tasks given to the commis team at the previous night's menu meeting. The family meal was also determined at this time. There are both lunch and dinner services Friday, Saturday and Sunday. Each service presented a deadline at which tasks needed to be completed and turned in. The team would also receive and distribute products, consolidated the refrigerators, as well as contributed excess product to the family meal. The day was concluded with a systematic and thorough break down.

I was fortunate enough to spend time working with the pastry team. The teams’ positions included chocolatier, cake production, ice cream production, and service. Bouchon Bakery produced and delivered breads, as the production area at The French  Laundry was meant for the needs of service. My first glimpse of service was from the pastry station. I learned how the meal would go for the guest as I watched the tasting menus ring in and the team work their way through the tickets to have it end in pastry. The following week I spent with the entremet and meat stations, helping complete what was necessary for service. I was able to assist in the plating of salads during service.

I learned a new respect for others work stations, with the attention to detail that everyone works with at The French Laundry. It truly shows the standard of cleanliness they hold. This goes with personal appearance as well, every detail counts. If you look at yourself as the brand, then you will understand an intrinsic truth: people judge. You also look at others work with respect as well, to understand that their work and efforts are their brand. I learned about pushing myself, to work as fast as I can without compromising the quality of my work.To have an understanding of the purpose of my work and what the result would be on the plate.

I spent two weeks with the commis team and learned there are three commis positions that are specific in task. The cornet commis utilizes the main kitchen space for the production of cornets during the Monday to Thursday lunch service hiatus. The chip commis, whose primary purpose is producing all chip, crackers, and pastas, works on the PM schedule. The sauce commis is in charge of producing the stocks and sauces for the restaurant. I also saw how a larger kitchen operates and delegates its tasks. For example the sous chef orders the products for the next day and delivers the tasks of preparing the products to the am sous chef who then delegates the tasks to the commis. To see and understand the chain of command at a different restaurant changed the way I perceived the hierarchy at my current restaurant.

This experience allowed me to achieve clarity in my career path.  I met many knowledgeable people who were willing to teach me their way. The only way to get better is to surround yourself with better people. I had to be dynamic and adjust to a new kitchen and communicate with the people in it to achieve the idea of what they see as their brand. I’ve been given the tools, what I do with these tools is all that matters. I have to think for myself. I have to invent myself. It’s my responsibility to learn people skills, and language skills, in order to increase my chances of success. Mostly and invariably, the real product I’m going to be selling will be me. 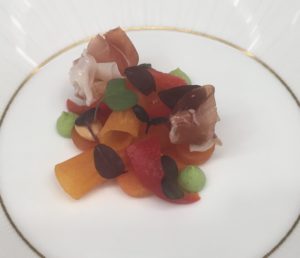