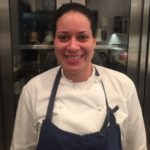 Gretchen, who was Demi Sous Chef at Bouchon, Yountville, chose to move to New York City for a one-month stage on pasta making at Marea.

I had never been in a two Michelin star restaurant and, although I did not know what to expect, I also felt very prepared for what was to come my way because of the training and standards I've received and developed at Bouchon. I focused on the culture at Marea in order to immerse myself into the new surroundings and I noticed that, even though methods were different, the level of care that was put into everything was exactly what I was used to.

My first week involved working one of the three sections of the Garde Manger station. It felt strange but humbling to go back to my beginnings as a cook and involve myself in all the work that goes behind the other side of the pass. Marea, much like Bouchon, is a nonstop machine with a momentum that seems to increase every day. With no set commis, I found myself prepping all the time, even during service. At times it seemed like the work was too hard, but I realized that it made the cooks better - they were the true chefs de partie, as everything in their stations had been made by themselves. During this week, while not seeing much of pasta first-hand, I did get to taste most of the dishes, witness some incredible fish butchering, made and rolled a few cracker doughs, and even made butter for the first time in my life.

The last two weeks were beyond incredible. I was welcomed by the pasta team, who made a spot for me at their already small table so that I could take part in all the preparations. I started off by learning the doughs - their product, their ratios and methods. I learned their recipes as I mixed, tested and kneaded multiple batches of dough. Then came the shaping, or as I like to describe it, the fun part. Everyday the routine was the same, which was of great help because repetition is a key to success, and so everyday more than 50 kilos of pasta would be processed by three pairs of hands, not including mine. During these two weeks, I also had the opportunity to spend a few days with the lunch chef de partie in the pasta station, so that I could see it's final stage getting cooked. It was incredible to see my own work being used in such a respected restaurant.

Since my time in New York City, I've been slowly taking over the pasta program at the restaurant and elevating it over time. I have been able to adjust what I learned at Marea in a way that fits with our production and demand. So far, the methods have worked perfectly and, even though I don't get to produce it on a daily basis, pasta day seems to be what I look forwards the most every week.