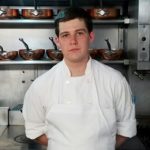 John first learned of Chef Bau in 2015 when he came to L2O in Chicago as a guest chef. This was Chef Bau's first and only dinner in the Americas. John was inspired by his cuisine and his approach to food and technique, and decided to stage at his restaurant in Germany, Victor’s Fine Dining by Christian Bau.

Chef Bau’s cuisine is strongly based on seafood, combining the simplicity of Japanese flavors and ingredients with a strong European technique, which makes his cuisine uniquely his own.  Being in the middle of Germany, not surrounded by oceans, all of the fish is shipped directly from Tokyo and Paris three days a week. Chef Bau looks for two things first and foremost when approaching any dish - quality of the produce and proper execution technique.  I am drawn towards working with seafood as my medium. I believe that the versatileness of the ocean is one of the most exciting aspects of being a chef. The quality of produce combined with demandingly perfect technique is a must in running any top kitchen.

Another part of Chef Bau, which I find interesting, is that it is a family restaurant. Chef Bau’s wife, Yildiz, runs the dining room and, with the demand of running a 3-star restaurant, the couple’s two daughters would spend the hours outside of school at the restaurant. Chef Bau would often take afternoon lunch with his family in the dining room and was always delighted when his daughters came and sat on the pass. This compassion for his family extended to the staff of the restaurant from the porter to the sommelier. It really created an environment where, even though the work is tough and the pressure is high, the staff wanted to be there.

When I started at Christian Bau I was the tenth cook. My day would usually start, after putting away the order, with preparing the brunoise mirepoixe, chive, and garnish brunoise for the entremetier. I would then do mise-en-place for the entremetier, garde-manger, and saucier. During service I would start on the amuse with garde-manger and then plate food for the garde-manger. Once all of the cold food left the kitchen I would help plate all of the hot food. Once the main courses were close to being all served I would plate all of the petite-fours, which would also be a job that I was consistently responsible for.

One month into my stage the second cook on pastry left and I was placed on the pastry station. In this position I was given more responsibility and was able to prepare more difficult recipes. Two weeks before the end of my grant a new cook was hired for pastry and I went to work on the garde-manger station.  I stayed on this station until my last day.

The first detail that I learned with this experience (and it was present throughout the duration of the stage) was the level of focus. As in any kitchen there is always a certain level of camaraderie and joking between the kitchen staff.  Under Chef Bau I found that this was not done during the mise-en-place and service hours, but held for before work, after work, and during breaks.  When mise-en-place was being conducted there was little to no talking. I found the limited distraction to be a cause for greater focus on the task at hand. The cooks were really looking at the task at hand and working as if each move was a calculated step. During service the only voice that could be heard was the Chef’s as he called out tickets and told the cooks what was next. There were no jokes or distractions, everything was about the food.

The second detail that I found fascinating was how many tasks were postponed until the absolute last second possible.  An example of this would be the herbs for garnish. In most restaurants herbs are picked before service and held in either ice water or between damp clothes to maintain freshness. In Christian Bau’s kitchen all of the herbs are grown hydroponically in Holland and arrive in soil. Only until it is time to put the herb on the plate is it picked from the soil.

Another example of doing mise-en-place “a la minute” is the cutting of the fish.  Before service Chef Bau will remove the turbot fillet from it’s skeletal structure. He will leave the skin intact with the flesh. Once the orders come in for the evening Chef Bau will pick the side of fish that is best sized for all of the orders and proceed to skin and portion the fish. Chef Bau cuts, seasons, and cooks every piece of fish that is served to his guests. I believe that it is the focus of detail on such seemingly simple tasks that truly separates a good chef from a master chef.

Being a stage in the kitchen, I wasn’t expecting  Chef Bau to give me all of his secrets of cuisine in a short two month time (which he didn’t). But I did learn a great deal of technique and method of execution by watching Chef Bau work. The kitchen is so small that everything is available to everyone, as long as you have the visual awareness to pay attention to your surroundings.

Every day that I was in the kitchen I felt my skill set improving. I timed each task I did and was always attempting to do the task faster the next day without the quality suffering, but rather improving. I was paying attention to details that I had not been aware of before arriving in Chef Bau’s kitchen. My focus deepened working in a kitchen with the least distractions I have yet to experience in a kitchen. Everything was building all day to that moment in service when the food hits the plate and the guest was ready at the table to eat the course that would come out only a few seconds later. Everyday it seemed as though the entire kitchen was performing a high wire act and might fall at any moment, which they didn’t. Maybe I did learn the ultimate secret of cuisine; the utmost attention to detail with a desire for perfection that can never be compromised.

Receiving this scholarship has been an honor to me. There are cooks all over the world who never receive an opportunity like the one that I have been granted. For a lot of the cooks that I had the opportunity of working with in Germany, I was the first American they encountered in the kitchen. I tried to give a good representation of myself, the Mento’r Foundation, and our country, by demonstrating a good attitude, a strong work ethic, and being an honest individual with a desire to learn.