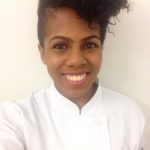 Kaylin was inspired by Chef Ben Shewry of Attica, how connected he was to Australian cuisine and how dedicated he was to using the native ingredients.

Coming from New York City, I had little to no knowledge of Australian cooking techniques. It was completely new, which was exciting to me. As I started to talk with a few of the Betony Chefs about where they thought I should go, it was a reoccurring theme that the time they had spent cooking in Australia was the best experience of their lives.

Melbourne seemed so interesting with the beaches and the city so close together, and the amazing food scene, everything seemed to be drawing me there. Then I looked closer into Attica's menu and it looked like it could have been written in a foreign language. I have never worked with kangaroo. What is a Marron? Wattleseeds? Vegemite? The idea of a constantly changing 20 course tasting menu was so interesting to me. It meant there was such a vast amount of information to learn there.

When I walked in to Attica on my first day I had no idea what to expect. The only thing I was told is that the first week we would be renovating the restaurant, cleaning and gardening. I had no expectations of meeting Chef Ben Shewry that week because it is not the type of work you would usually see an executive chef doing. I took two steps in the door and the first person to greet me was Ben Shewry. I was shocked, I came to learn that he had been there longer than any other member of the team, cleaning, painting and building alongside his cooks. This work ethic was made evident throughout my entire stage.

After the first week I was assigned to Garde Manger/ Pastry. I was responsible for three savory courses and one dessert. Everyday would start out at 9:30am with all the cooks filling the tart shell for the day. The menu had three small tarts per guest. After we finished filling tarts we would have a morning meeting to talk about service. Next all of the cooks would head to the garden to pick all of the herbs and vegetables needed for the day. On Thursdays we would stay there longer to plant new vegetables and weed the garden beds. After returning from the garden we would start preparations for service. For me this typically included making doughs, ice creams, caramels, and portioning. Everyday around 3:30pm one member of the team would put up the entire staff meal for that day. Then another staff member would begin speaking at 4:00pm on any topic of their choice. This was something that I found very beneficial for the team. It allowed us to get to know the interests of the each team member.

One of the most important things that I learned from my stage at Attica was how to run a kitchen. The way that Ben Shewry and the other Sous Chefs treated all of the cooks was very respectable. They really took care of their cooks. They listen to them and valued the ideas of every member of the team.

I also was able to learn about many native ingredients in Australia. There were so many things that I had the opportunity to work with that I had never heard of. I have also typically only work savory stations so it was extremely interesting to learn more about the pastry side of the culinary world. I became so interested in desserts after the first month that my Chef de Partie and I decided to work on a collaborative dessert to present to Ben Shewry.

I also was able to learn a lot more about gardening. Living and cooking and New York City has not given me a lot of exposure to gardening. At Attica they were growing a huge variety of produce, and we were in the garden for two or more hours each day. I really enjoyed planting and watching how various plants thrive in certain conditions. It was interesting to learn all of the different herb varietals and vegetable that they were growing. There was one dish on the menu that was a broth that contained thirty different varietals of herbs.

During my time at Attica I learned many lessons that I hope to take with me during my culinary career, and when I open a place of my own. This entire experience has made a huge impact on how I think about food and how I hope to run a kitchen. While I was at Attica I was able to meet and cook for many of the top Chefs in the world because the Worlds’s 50 Best Restaurants were being announced in Melbourne this year. Watching these chefs interact I realized how they were able to make it to this level. They are still learning from their surroundings. The way they talk to each other, they are not pretentious or afraid of learning from one another. This was one of the most insightful weeks of my culinary career. The ability to go to Attica was a blessing for me. I was able to make connections that I hope will grow and get stronger. That is the biggest achievement that came from this experience. I have met mentors and chefs that I believe I can still go to with questions even though I moved back across to the other side of the world. I have made friends from all over the world that I hope to stay in contact with. Even though I was not a part of the team for long I feel like they allowed me to become apart of their family. They were the most welcoming team I have ever worked with. Each of them were very unique and possessed a different set of knowledge and skills that they were more then happy to share with anyone who wanted to know. I can not thank the Ment’or BKB Foundation and the Attica Team enough for this experience, it was nothing short of life changing.