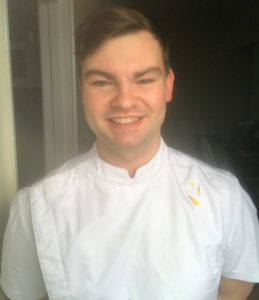 TJ staged at Core by Clare Smyth in London. TJ wanted to experience a different management style in order to learn how to be the most effective leader.

I chose to do my stage at Core by Clare Smyth in London to explore a new city and learn from a different management style. I work at Pineapple and Pearls in Washington, D.C. and find it to be a completely different style of restaurant. . I was recently promoted before I had left for my grant and wanted to learn how to become the most effective leader.  While both places create incredible food and a warm atmosphere for all guests to enjoy in the dining room, they both are extremely different in management from the back of house perspective. Throughout my stage I had been comparing both restaurants to decide how I would like to move forward in my career as a manager.

When I arrived at Core I had begun working in the garde manger section for a couple of weeks. All sections were run by a chef de partie, and most sections had a few demi chefs. I had mainly focused on helping with longer tasks that helped the demi chef’s focus more on smaller tasks so they would have time to organize their section. The chef de partie would primarily focus that all tasks were being completed, and up to standard. I found this to be an effective management outline with having multiple managers, and ultimately food was checked more consistently.

I had then moved to the garnish section were I had done similar long tasks, however now they had trusted me with more responsibility. Core had multiple stages every week and they looked to me to organize them and just like the chef de parties, it was now my responsibility to ensure all tasks by stagiers were completed properly. Head chef Jonny Bone had taken my long stage as an opportunity to install an additional deep clean and prep portion of the day for stagiers. I found this to be an effective way to manage the team and to constantly improve instead of ever becoming stagnant with day-to-day tasks.

Following a week on garnish I then moved into the pastry section. The desserts were exceptional, however the section had recently fired a demi chef and the previous chef de partie left suddenly. To ensure standards were being met, Jonny had placed sous chef Ben into the section, until people had been trained properly. I had an immense time in this section due to the fact that the team was in need of help more than the others, so I had gotten to help with a bit more.

Lastly, I had ended my stage helping with the sauce section. This had been the most difficult section due to the fact of ensuring all the sauces and proteins were handled properly. In addition to that, the sauce chef had been given the duties of junior sous chef, meaning they would also organize the whole team and kitchen. It was a lot of responsibility for one person and I had helped with a lot of cooking tasks so they could focus more on management.

Overall I had found the kitchen to be a bit different in the fact that management was much more direct with the chefs. Personally I have learned that not all people can be managed in the same style. For example, some people prefer that you are very direct and blunt with feedback, while others you need to become more careful with your words and criticism. Neither ways are correct but simply just different. Staging at Core also showed me how they had effectively ran a European style brigade system. This had consisted of more teamwork opposed to a traditional American system of individuals. I am thankful for this opportunity and believe that ultimately I will move forward with taking a bit of both management styles.