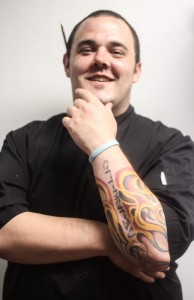 Todd spent 3 months at Benu in San Francisco under the direction of Chef Cory Lee and his team. From slicing pickled kohlrabi to making desserts, Todd was able to take lessons learned from his experience back to his home kitchen ZZest.

Tell us why you chose Benu as the restaurant for your stage.

I chose to do my stage at Benu because the chef I work for now, Justin Schoville, told me that it was the best experience he has ever had while dining out. I was never really into Asian-influenced cuisine until I worked at Benu and saw the finesse and passion of Chef Cory. He defines his food as American, not Asian. American chefs can draw influence from everywhere to create their food and that is exactly what Chef Cory did. He took the food native to Korea and added some classic French technique with modern American flare to create Benu.

What work did you do during your stage?

During my time at Benu, I was moved around quite a bit. Stagiaires typically work the morning shift (8am-5pm) doing prep work for the chefs de partie. After my first day I was asked to work the evening shift (11am-12:30am). I was assigned to work with Coleman, the chef de partie for the fish station my first night. I worked with Coleman for the first 2 weeks doing prep work that was necessary for the night’s service, such as cleaning yellow chives for the frog leg dish, slicing pickled kohlrabi, cleaning frog legs, and anything else he needed. After my first week, I was moved to the meat station to work with Latesia where I would help prepare all of the garnish for her sous vide short rib or sous vide chicken dish.

After working with the meat station chef de partie for a week I was moved onto pastry where I worked with Chef Courtney and Chef Lauren. Chef Lauren worked the dinner service while Chef Courtney was the creative mind behind the Benu desserts. I was often put in charge of making the family meal desserts, then after about 2 weeks, I was trusted enough to start doing some of the actual dessert prep from start to finish on my own. Before working with Chef Lauren, I didn’t really have much experience in the sweet side of the kitchen and since my time at Benu, I have been much more interested in learning about desserts and overall production of anything they might include. Upon my return to ZZest, I was asked to take over the dessert menu and the chef tasting desserts for our 5 course Chef tasting menu.

What did you learn during your stage?

During my 3 months at Benu, I learned that finesse is key. It is important to work efficiently, to work cleanly, and to stay organized in every aspect of the kitchen. Working in a kitchen like the one at Benu has opened my eyes to how a restaurant should be operated. It was intense, but every minute spent there was a new learning experience. Being surrounded by chefs that are so dedicated to their craft was an amazing experience in itself. Everyone that stepped foot through that door, be it kitchen workers, front of house, the sommeliers, the baristas, the back office, was very proud to be apart of such an amazing team and it was shown through the food and the service. Everything was perfect, always. When I first walked into Benu on February 2nd, I thought I knew what I was doing in a kitchen. I have never been so wrong in my entire life. Working at Benu for 3 months has totally changed the way I work in my home kitchen at ZZest. Sense of urgency, cleanliness, pride--all key aspects of a great chef--were all driven into me every day I stepped foot in that kitchen. Even how you would carry your side towel, or wear your apron was a big deal. The chefs at Benu wear all white, and at the end of their long, stressful shifts, they were still all white. It was an amazing sight to see.

How has your internship experience followed you and influenced you at the restaurant you currently work at, ZZest?

Since returning to work at ZZest, I have been able to help teach everyone I work with about everything I learned at Benu. Menu ideas, dessert ideas, how you treat guests. It opened my eyes to more than just cooking, it opened my eyes to the whole realm of hospitality. Everyone is treated with respect, everyone is proud of their work, everyone was always the most dedicated person in the kitchen.

Benu helped me become a mentally tougher chef. I was away from all of my friends and family for 3 months, working 65 hours a week in one of the best kitchens in the world, and I somehow made it out alive. After Benu, I have taken a whole new approach to food and cooking and just working in the profession overall. From the precise knife cuts to plating of micro celery on a soy milk skin dessert, I have learned to cook with finesse and passion. 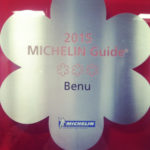 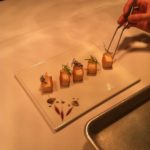 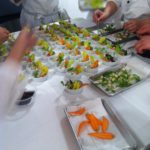 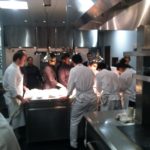 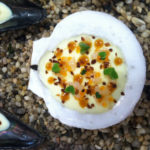 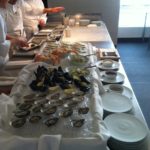