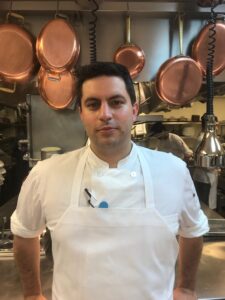 Zachary chose to stage at Amass, in Denmark to study about an entirely new cuisine that differed from his french culinary background and learn more about sustainable cooking.

For most of my culinary career, up to this point, I have been learning French culinary techniques and dishes. From my time at the French Culinary Institute to the time I’ve spent in the kitchens of Chef Daniel Boulud, the focus has been on French cuisine. As much as I would have loved to dive deeper into French cuisine by traveling to France, I knew that this experience would be the most ideal time to learn about a new cuisine and a different way of thinking about food. That is why I chose Amass Restaurant in Copenhagen, Denmark.

At Amass, the cuisine is described as New Nordic, but the focus is not only the cuisine, but the entire way the restaurant is set up to be more conscious and aware of waste produced and work toward a more responsible (or “sustainable”) way of cooking. The term “sustainable” may be a term that is overused at this point and does not fully describe the mindset at Amass. This is more than just sourcing sustainable or organic product and then taking the “scraps” and using them in a stock. Just like you would find in a French brigade with technique, repetition and mastery, it is a school of thought or ideology that is engrained in the people and structure of the restaurant.  The idea is more how you can fully utilize a product so that there are no “byproducts”, but simply more of that product to be used in a different way.  The term ‘byproduct’, by definition, is a secondary result, unintended but inevitably produced in doing or producing something else. In many situations in other kitchens, these byproducts may turn into waste. It is at this point that a problem arises. The idea is to eliminate the waste and use the byproducts somewhere else or simply transform them into a more useable or delicious form. Too many times you see cooks discard what could be useable product because they don’t know what to do with it or feel that they do not have time to use the byproduct in another form. I don’t believe that this is the fault of the cooks, but more that there is not a place for it and they are busy with other tasks to accomplish before service begins. The question now is how do you set up a structure that supports eliminating waste?

Amass has many systems in place that keep the products moving so that very little is actually discarded. From my experience there, very few items were actually placed in the trash can. Amass has a garden and a greenhouse to grow items for the restaurant, but it also gives the opportunity to use certain food trim items in the compost for the garden that is then used in the soil for growing more ingredients. The greenhouse is run off an aquaponic system. This means that the water circulating through the greenhouse is filtered by the fish living in the pond where the water for the greenhouse comes from. They then take other food trim from the kitchen and turn it into fish food for the fish in the pond for the greenhouse. The leftover water from ice baths is saved throughout the day and then used to clean the floors or water a few of the plants (as long as the water has not had anything else in it). The idea of saving water like that is really at the base of the mentality that comes along with trying to eliminate waste. It’s much easier to simply pour the water down the drain without thinking about it.

Behind the restaurant there are several different bins for product that will not necessarily be used in the food. There are bins for soft plastics and hard plastics to be recycled. There is a bin for chicken feed that the chicken farmer will pick up to take back to their farm to feed the chickens that may be used at Amass or other restaurants in the area. There is a non-compost bin where these food items (such as what may be left on a diner’s plate or anything that has been processed in any form) will be picked up by a bio-fuel company that will convert the food to a fuel source that they will then get back to run their brewery that they were opening down the street.

Now comes the part of transforming the ‘byproducts’ into forms that will eventually be used in the dishes. This is what most people come to think of when mentioning New Nordic cuisine. The techniques used for this are typically done through a form of fermentation or dehydration. Many of the garden herbs that are not used immediately are dried and then infused into teas or oils or powders. Other items may be fermented over a long period of time to form a miso or garum (fermented fish sauce). Other items are fermented for a shorter period of time to change the taste and texture and extend the life of the product. The main form of fermentation used to accomplish this was a lacto-fermentation where a certain amount of salt based on weight of the product was then vacuum sealed and left at a certain temperature to ferment. Essentially this form of fermentation eliminates the bad forms of bacteria and allows the good bacteria to flourish. This would be done with submerging in water if a vacuum sealer were not available. This form of fermentation can prolong the shelf life of an item but it does not preserve the product quite as long as canning would. Some items were fermented whole while they were in season to preserve and then used later and some were the trim or ‘byproducts’ fermented to help transform that product into a different flavor profile to use more immediately. This beef tongue dish (pictured below) had a mixture of ingredients that were fresh and fermented which show the contrast in flavor but also is an example of how the two forms of a product work together in harmony. The main components of the dish were fermented and preserved quince, smoked sea snails (which gave a flavor similar to bacon), and a fermented kale stem oil. It is then garnished with herbs from the garden. I believe they do these things because it makes sense to utilize everything that comes through the doors but also because they are delicious at the end of the day.

Initially, I thought that the focus would be on learning and seeing more about fermentation and preserving. I suppose that is what I was most excited about learning before I got there. But once I was there it became apparent that the fermentation and preserving was just one aspect of a much larger scheme to eliminate overall waste. That is what I actually think is the most important thing that I took from this experience. It’s more about the process and establishing the structure to allow these things to happen on a daily basis so that everything is used consciously and with respect.

I would like to take what I have learned at Amass and see how some of these techniques can be mixed in with the French techniques I have been learning up until this point. Perhaps mixing in a fermented item to a classical sauce or seasoning charcuterie with the dehydrated stems from picking herbs. These types of things can be done easily. The real challenge is finding a way to make that trash pile smaller. Thinking about how to do it can be overwhelming. When speaking to Chef Matt Orlando about this and how he might try to go about this in a city like New York City, he said, “Start with the water.” This really got me thinking. The water won’t make the garbage pile any smaller, but it’s the action of consciously taking that extra step to save the water. This is why I believe the water is at the base of this structure. It's something relatively simple but that bit of extra action to not discard it is what it will take to then go that extra step with another item.

When choosing where to go for this experience, I also wanted to go somewhere where I would eventually hope to be a part of their team there even if it was for just two months. I have to say that this was definitely achieved at Amass. The entire staff was incredibly friendly and accepting. Despite knowing that I would only be there briefly, they were willing to teach and explain what was going on with the restaurant and the food. Chef Matt Orlando was a very inspiring leader and definitely set an example for a responsible cooking methodology that I will carry with me going forward in my career. I am extremely grateful to Ment’or for this opportunity and would really like to thank everyone who helped in making this experience an amazing one for me. 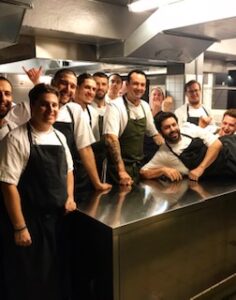 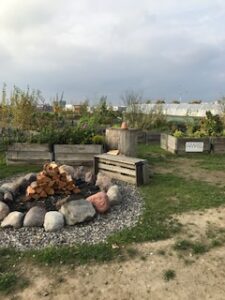 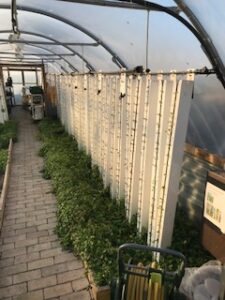 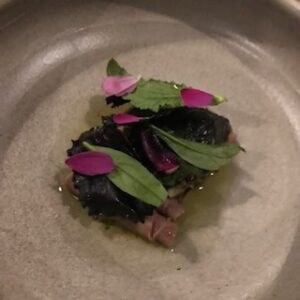