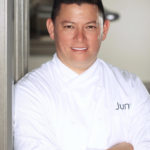 At 17, the ever-ambitious Chef Shaun Hergatt, who has always felt that cooking was “in his blood,” pursued a four-year apprenticeship at Crystal Twig, a fine dining restaurant in Cairns where he was trained in classic French cooking. In 1997, at the age of 23, he became chef de cuisine of The Dining Room at The Ritz-Carlton, Sydney, where he quickly earned international accolades including an AHA “Best Young Chef” award in 2000. Chef Hergatt then moved to the United States and joined Atelier at The Ritz-Carlton, Central Park in New York City as Chef de Cuisine. Five years later, he moved south to become the executive chef at The Setai in Miami. In 2009, Chef Hergatt returned to New York to open his eponymous restaurant, SHO Shaun Hergatt in the Financial District, and opened Juni in August 2013.