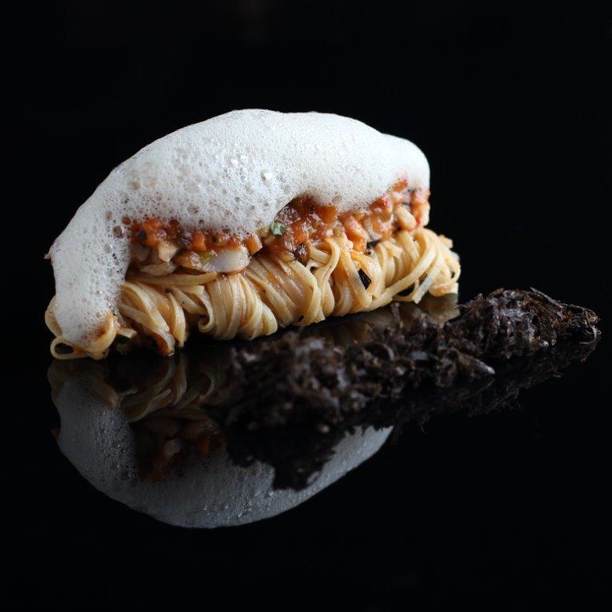 Bolognese Sauce
Combine the onion, garlic and butter in a pot. Set over medium heat and season lightly with sea salt. Cook the onions until they are soft and translucent (about 5 to 7 minutes). Add the tomatoes and heat through, season lightly with sea salt, and when the tomatoes are hot, add the chardonnay and bring to a boil. Add the three stocks and bring to a boil then reduce the heat to low. Cook on low, (stirring often and being careful not to let the sauce burn on the bottom), until all the liquid has evaporated and the sauce is thick (about 45 minutes). Pass the sauce through a food mill into a stainless steel bowl then set that bowl over a bowl of ice and stir to cool.

Capellini
Set the rollers of the pasta machine at the widest setting. Use half of the pasta dough and keep the other wrapped in plastic. Begin to roll the dough through the pasta machine. Fold the dough in half from end to end. Run it through the same setting again and repeat once more. Roll it through the next setting once, repeat the process going down a setting each time until thin (check recommended setting for Capellini) or the second to thinnest setting. Repeat with the second piece. Run the sheets of pasta through the Capellini cutter. Dust a tray with semolina flour and lay the Capellini on the tray and dust lightly with semolina. Cover with plastic wrap until ready to use.

Brown Butter Truffle Froth
In a deep pot over medium heat, reduce the Mushroom Stock by half. Add the truffle juice and reduce by a quarter. Add the cream and bring the mixture to a boil. Remove from the heat and add the butter, Brown Butter and truffle oil while blending with an immersion blender until frothy. Season to taste with sea salt, white pepper and a few drops of freshly squeezed lemon juice. Keep warm in the pot

Lobster Beurre Monte
Reduce the lobster stock until only 1 tablespoon remains. Remove from the heat and gradually whisk in the butter a little at a time until emulsified. Season with sea salt, Espelette pepper and a few drops of freshly squeezed lemon juice. Keep warm.

To Serve
Bring a pot of blanching water (1 tablespoon of salt per quart of water) to a boil. Divide the Bolognese Sauce into two pans (it’s easier to mix and plate using two pans). Add the Brunoise Vegetables and chopped black truffles (if using) to the Bolognese Sauce and heat on medium heat. Add the Lobster Beurre Monte to each pan. Add the lobster and heat until just hot, but not overdone. Cook the pasta for 1 ½ minutes in the boiling water and divide it into the two Lobster Bolognese pots. Add the chopped basil and extra virgin olive oil. Season to taste. If it’s too dry, add a little more Lobster Beurre Monte. Spin the pasta around a meat fork and lay it down the center of six heated plates. Spoon the Lobster Bolognese in a line over the pasta. Blend the Brown Butter Truffle Froth with an immersion blender until frothy. Spoon the froth over the pasta and serve.

This recipe comes courtesy of Josiah Citrin and Mèlisse.