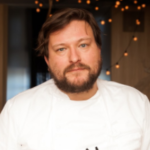 Chef Erik Anderson launched his culinary career in 2006 with a five-month internship at Chef Thomas Keller’s The French Laundry before moving to Minneapolis for a position at Auriga under Doug Flicker, who became his mentor. In 2009, Chef Anderson brought his creativity to Tim McKee’s Sea Change Restaurant & Bar, where he created menus focused on sustainable seafood and seasonal ingredients. While there, he received a James Beard Award Nomination. Chef Anderson then relocated to Nashville to co-helm the kitchen at The Catbird Seat, which is considered one of the country’s most groundbreaking restaurants. During that time, he was named one of Food & Wine Magazine’s “Best New Chefs.” Later, back in Minneapolis, Chef Anderson partnered with Chef Jamie Malone to revitalize the iconic 70-year-old restaurant Grand Café. In late 2017, Chef Anderson’s dream of leading a Michelin-starred kitchen came true when he accepted an offer to helm the kitchen at Daniel Patterson’s Coi in San Francisco.