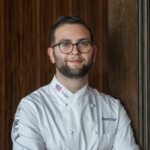 Chef Jordan Guevara began his career as a high school student at the Jacobson Culinary Arts Academy in Florida under the tutelage of Chef Guillame Alinat. Chef Alinat led Chef Guevara to his first job at Restaurant Hapa, perhaps the only fine dining restaurant in his hometown. While there, Jordan worked under Chef Brett Gardiner on and off for four years. Following his graduation, Jordan moved to San Francisco, where he worked at many Daniel Patterson restaurants under various chefs, including Kim Alter, Manfred Wrembel, Charlie Parker and Chris Johnson. After two years of shifting between DPG restaurants, Jordan began working at Daniel Patterson's Coi, where he remained for two and a half years. At the end of Chef Jordan's tenure there, Chef Matthew Kirkley was selected to champion the Coi Kitchen upon Daniel Patterson's departure. Just before the transition, Chef Jordan left Coi to be a part of Single Thread's opening. Later, he spent six months at Lazy Bear. Chef Jordan is currently an assistant for Bocuse d’Or Team USA 2019.