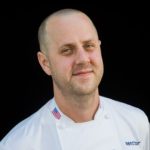 Born in Baltimore, Matthew Kirkley’s relationship with seafood began on the docks of the Chesapeake Bay, where he often went crab fishing with his father. The reverence that he developed for pristine fish and shellfish while living there still impacts his culinary point of view today.

Chef Kirkley entered the Culinary Institute of America in 2001 and began his career at Striped Bass in Philadelphia. In 2003, he moved to Chicago to work at Seasons Restaurant in the Four Seasons Hotel, and then later at NoMi in the Park Hyatt Hotel. In 2006, he took a sabbatical from his work in the United States to stage in Europe at The Fat Duck and Le Gavroche in London, and at Le Meurice in Paris. Upon his return from Europe, he moved to Las Vegas to become sous chef at Restaurant Joël Robuchon. In 2008, Chef Kirkley returned to Chicago to open L20 under Chef Laurent Gras, followed by Ria in the Elysian Hotel. In 2011, he returned to L20 as Chef/Partner and earned two Michelin stars for three consecutive years. In the fall of 2015, he moved to San Francisco to take the helm of Coi, following in the footsteps of celebrated Chef Daniel Patterson. He was awarded a third Michelin star in the fall of 2017. Simultaneously, Chef Kirkley won the National Selection for Team USA to represent his country in the Bocuse d’Or 2019. He is currently training for the competition in Napa Valley.