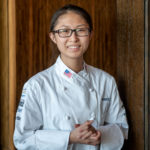 Mimi Chen became interested in the culinary arts when she participated in a C-CAP competition during high school and earned a full scholarship to the International Culinary Center (ICC). In preparation for culinary school, Mimi interned at Café Boulud. Upon graduating from ICC, she was offered a position at Restaurant DANIEL, where she continued to learn and grow as a cook. In 2016, Mimi placed first in the Ment'or Commis Competition. This win awarded her the opportunity to stage with Team USA 2017 and join them in Lyon for the Bocuse d’Or finals. She became part of the first ever American team to win Gold.Following her stage with Team USA 2017, Mimi decided to move to San Francisco to work with Chef Matthew Kirkley at the now three michelin starred Coi. In November 2017, Chef Kirkley and Commis Chen competed in Las Vegas for the opportunity to represent Team USA in the 2019 Bocuse d’Or. After winning the competition, Chef Kirkley and Commis Chen began training for the Bocuse d’Or Americas Selection in Mexico City in order to qualify for the finale in Lyon. Team USA was victorious and took home Gold at the Americas Selection in April 2018. Mimi Chen is currently training for the finale with Chef Kirkley in Napa Valley.