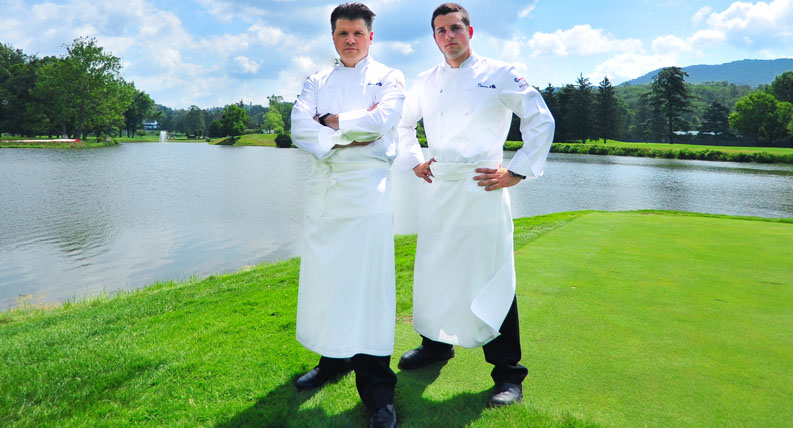 Chef Richard Rosendale of The Greenbrier in White Sulphur Springs, West Virginia, represented the United States at the 2013 Bocuse d’Or in Lyon, France (January 29-30, 2013). Chef Rosendale was joined in Lyon by his commis Corey Siegel. The two went through an intensive training process and placed 7th out of 24 teams in the Bocuse d’Or, the world’s most challenging and prestigious culinary competition. Chef Rosendale was mentored by the Foundation’s Board of Directors, Chefs Daniel Boulud, Thomas Keller, and Jérôme Bocuse, and Team USA coaches Chefs Gavin Kaysen (head coach), Grant Achatz, and Gabriel Kreuther.

ABOUT RICHARD ROSENDALE
Chef Richard Rosendale was exposed to strong culinary cultures at an early age, with one Italian and one German grandmother nurturing his love of food. But Rich considers his mom to be his biggest influence and mentor, teaching him about perseverance and hard work at a very early age. He has applied those traits throughout his career, blazing a path like no other in his field. Rich has been quoted as saying, “No matter how much adversity I face, I know that I will be successful because of what my mother instilled in me at an early age.”

Rich has trained with Michelin Star chefs from around the country. He is also one of only 67 Certified Master Chefs in the country, passing an eight-day, 130-hour cooking exam covering all aspects of cuisine. In the culinary industry, and around the world, Rich Rosendale is synonymous with prestigious accolades and accomplishments. He has competed in over 50 cooking competitions, including the world’s most demanding, the Bocuse d’Or. He was also the youngest member and Captain of the 2004 and 2008 U.S. Culinary Olympic Team. In 2006, at the World Cup Expogast in Luxembourg, he received a rare perfect score and two gold medals. At the World Master’s Basel in Switzerland in 2005, he received 2 Gold Medals in his first international competition.

In 2009, Rich oversaw the epic rebirth of The Greenbrier as the Executive Chef and Director of Food and Beverage. Part of that initiative included launching the Greenbrier Farm, a 44-acre produce farm that supplied 75% of the produce for the 750-room hotel. He designed and opened five new restaurants at the Greenbrier, as well as a 100,000 square-foot casino. Rich also oversaw the food & beverage for 3 PGA Tours for the Greenbrier Classic and was the lead chef in the Greenbrier Culinary Apprenticeship Program, the foremost training program for chefs in the United States and the oldest of its kind.

In 2013, Rich formed Rosendale Collective and began traveling the country offering world-class workshops on everything from barbecue to Sous-vide cooking. His tailored classes have grown into a culinary revolution, offering chefs and foodies alike access to a personal, effective way of learning in addition to tremendous networking. The Company also offers customized training programs for clients ranging from the U.S. Military to fortune 500 companies.

Rich teamed up with CBS in 2013 to star in the Emmy-nominated show, Recipe Rehab. Rich also produced and starred in “The Contender,” a documentary that followed his training process for the Bocuse d’Or culinary competition.

In 2016, Rich opened Roots 657 in Leesburg, Virginia. The café and local market feature house-made soups, sandwiches, and smoked meats along with locally and regionally curated artwork and heirloom gifts for the home.