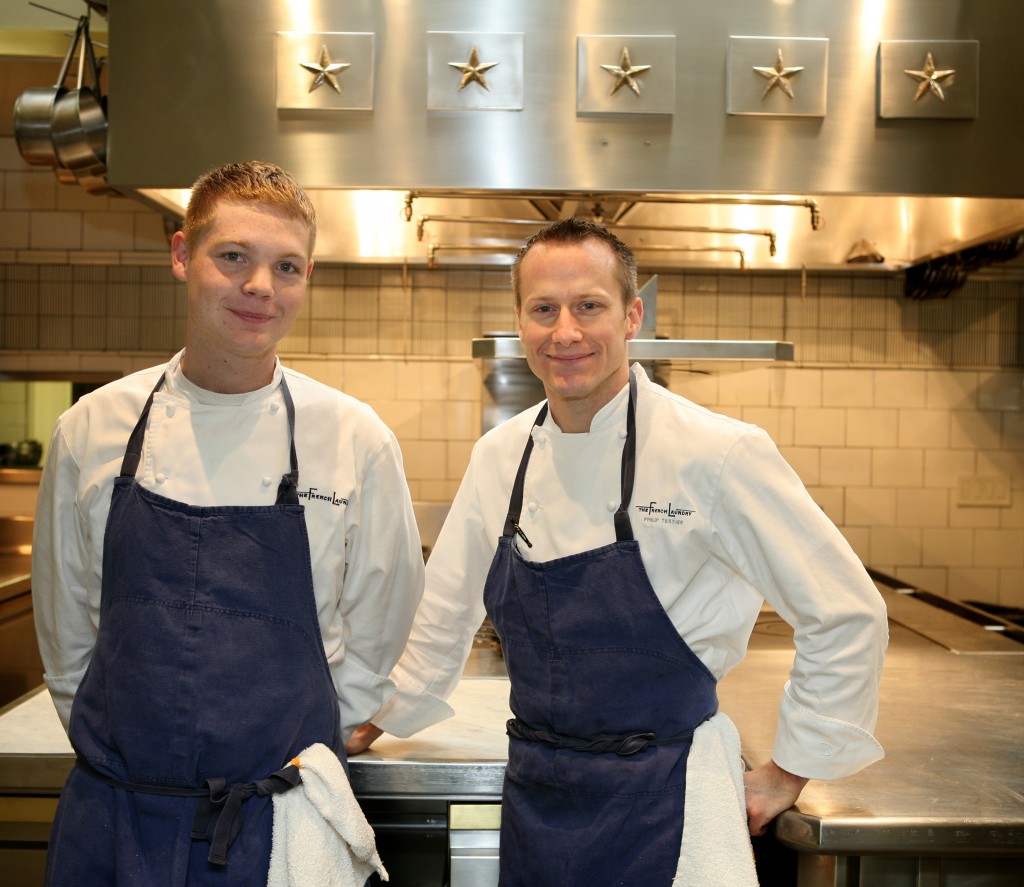 Team USA made history this year, winning Silver at the 2015 Bocuse d’Or cooking competition in Lyon, France! This is the first time the US has placed on the podium, and we are incredibly proud of Chef Phil Tessier and his Commis, Skylar Stover, for all their hard work and dedication.

Over the course of two days, 24 teams of the most gifted culinary minds from across the world competed on behalf of their country and represented their nation at the World Cooking Contest. Team USA competed on January 27, 2015 and presented the acclaimed panel of judges with a stunning meat platter of Barrel-Oak Roasted Guinea Hen and a beautiful fish plate, showcasing Brioche-Crusted Brown Trout Pave. Both the meat platter and the fish plate were designed by the lauded Martin Kastner from Crucial Detail.

This was a long journey filled with sacrifice, and unwavering focus and practice. We are so proud of Team USA for their extraordinary representation of America's culinary talent and our country as a whole!

We are grateful for your support, and look forward to sharing this amazing achievement with you!

ABOUT PHILIP TESSIER
Chef Philip Tessier has been the Executive Sous Chef of The French Laundry for the past three years, overseeing the daily operations of the kitchen alongside the Chef de Cuisine. Tessier’s legacy with the Thomas Keller Restaurant Group began over a decade ago in 2004 at Per Se, where he started as Poissonier. He quickly rose to the position of Sous Chef and was instrumental in the successful launch of Chef Thomas Keller’s acclaimed New York restaurant and its achievement of three Michelin stars. Tessier’s constant demonstration of exceptional leadership and cooking abilities led to his selection as Chef de Cuisine of Bouchon in Yountville, CA. At Bouchon, he ensured the Michelin-starred restaurant’s consistent performance and also channeled his energy and creativity into a series of special menus highlighting the diverse regional cuisines of France. After more than three years as Bouchon’s Chef de Cuisine, Tessier was again tapped by Chef Keller to move into his current position of Executive Sous Chef at The French Laundry, where this year he is spearheading the development of a “living” cookbook database for use within all of the Thomas Keller Restaurant Group properties.

Tessier’s culinary career began at the Williamsburg Inn in Virginia, where he first gained an appreciation of kitchen logistics and management. To build on that experience, he enrolled in the Culinary Institute of America in Hyde Park, NY, and after receiving his degree in 1999, spent an additional year at the CIA as a post-graduate fellow in the Escoffier Room restaurant. A love of French cuisine led Tessier to France, where he worked in the highly regarded kitchens at L’Essential and Le Moulin de Mougins. Upon returning to the United States, Tessier spent time training under Chef Eric Ripert at New York’s Le Bernardin, where he rose through the ranks to the position of Sous Chef before joining the opening team at Per Se.

In December 2013, Chef Tessier was selected to represent Team USA in the prestigious Bocuse d’Or competition. Dubbed the “Culinary Olympics,” the Bocuse d’Or is among the most demanding international cooking competitions, pitting chefs from twenty-four countries against one another in a five and a half hour cooking challenge in front of thousands of cheering fans. Held every two years in Lyon, France, the next one will take place in 2015.

ABOUT SKYLAR STOVER
Skylar Stover began as a Commis at The French Laundry in March 2013 and, after demonstrating intense dedication and focus, has moved into the position of Chef de Partie on Garde Manger. Prior to his joining the team at The French Laundry, Skylar helped to open The Book Bindery in Seattle under former Per Se alumnus Shaun McCrain.

In December 2013, Stover was selected to represent Team USA in the prestigious Bocuse d’Or competition. Dubbed the “Culinary Olympics,” the Bocuse d’Or is among the most demanding international cooking competitions, pitting chefs from twenty-four countries against one another in a five and a half hour cooking challenge in front of thousands of cheering fans. Held every two years in Lyon, France, the next one will take place in 2015.