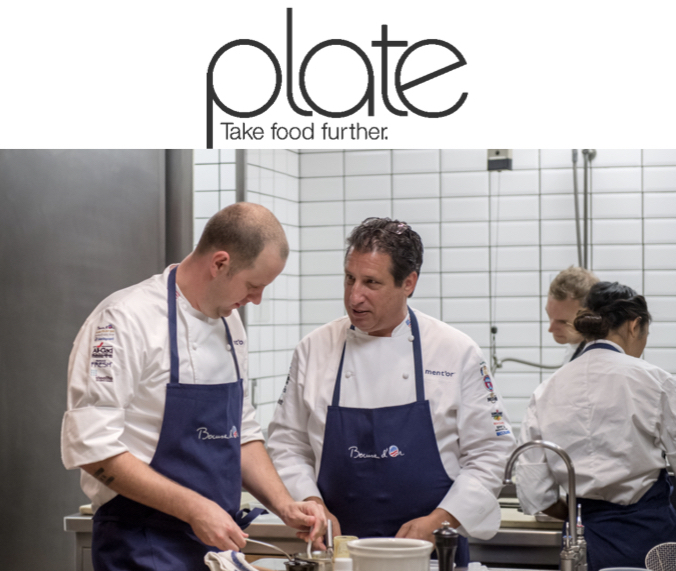 In January 2017, the American team at the Bocuse d’Or competition in Lyon, France, made history when head chef Matt Peters and commis Harrison Turone took the coveted gold for the first time in history. Plate was there for the grueling five-hour competition—a culmination of more than two years of intense training and rule-restricted recipe development. This year, Team USA head chef Matthew Kirkley and commis Mimi Chen will endure what’s been called the Olympics of the culinary world to try and bring home another gold statue. As a follow-up to our award-winning long-form feature on the Bocuse d’Or, we are proud to host this blog series, “Behind Team USA at the Bocuse d’Or,” which will explore before-and-after insights pre- and post-competition. We’ll capture the personal, behind-the-scenes perspectives of past and present chefs, captains, coaches, program directors, and others as the team prepares to head back to Lyon in January.

This year, Robert Sulatycky serves as the head coach of Team USA. We hear from him as he keeps the team motivated and prepared to go for another gold win.

After our 2017 win, the eyes of the culinary world are keenly focused on us. We’re no longer the underdog; we’re the country to beat. I’ve been involved with the Bocuse d’Or for 25 years and as head coach of Team USA this year, I feel the weight of the world on my shoulders.

To prepare, we’re spending 14 to 16 hours a day, six to seven days a week in the kitchen. We’re perfecting our recipes and working on the timing of our run. At this point it’s important for me to keep the team motivated and in good spirits. With the competition just weeks away, I need to make sure we’re meeting all of our training deadlines. I need to keep Matt and Mimi focused on the task at hand – which is cooking the best food of their life. Over the course of the past year, all of the team members have stepped up and know the goal is to win. Our mantras are “Here we go!” and, “it’s going to be great!” Every now and then, I treat them to In-N-Out Burger or some good, local tacos after a long day in the kitchen. We’ve become a tight-knit family.

As the team works toward competing on January 29, it’s my role to ensure they have access to the essential tools. This includes counsel from a distinguished culinary advisory board comprised of Michelin-star chefs, past Bocuse d’Or USA winners and an arsenal of support from industry partners.

The puzzle here is how and when these tools are deployed. It’s a build-up to competition day and like an athletic contest, the team needs to peak that day. It’s a mental and physical game. The long, grueling days and weeks take a toll on the body. The creative development and exploration that Matthew Kirkley is pursuing, pushes him to seek out perfection. It’s elusive but attainable. It pushes him and the team mentally. It’s simultaneously all-encompassing, exhilarating, and exhausting.

The most powerful tool we have is the tastings we do with the Ment’or BKB board, including chefs Thomas Keller, Daniel Boulud, Gavin Kaysen, Mathew Peters, Phil Tessier, Tim Hollingsworth, Claude Le Tohic, Erik Anderson, and Rich Rosendale. They give the team constructive and poignant feedback that can be hard to hear at times. We’re going into one of those tastings tomorrow. The pressure and tension in the kitchen are palpable as we approach the competition. But we relish this feedback. We want to be the best team in the world… again.