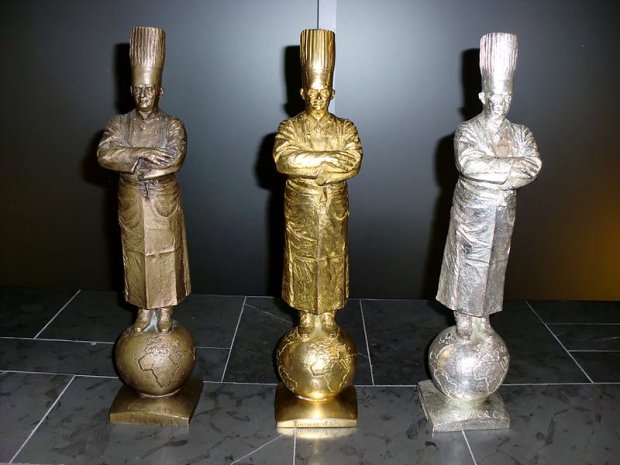 After years of disappointment, Team USA won the coveted silver at yesterday’s final.

Created in 1987 by renowned French chef Paul Bocuse, the global gastronomic tournament treats haute cuisine like a sporting event, pitting 24 chefs from around the world against each other in an intense, five-hours-long cook-off in front of a live audience. Winning this highly publicized battle royale can make a chef’s career.

For more than two decades, the U.S. has participated in the biennial global cooking contest, often referred to as the culinary Olympics, but previously never placed higher than sixth — an unsung history occasionally fraught with comical bloopers. Consider 2007, when Gavin Kaysen’s ambitious bid for gold was tragically undone by a French dishwasher unwittingly eating his chicken-wing garnish. He finished 14th.

American aspirations aimed higher in 2008, when Bocuse himself asked esteemed New York chef Daniel Boulud to help establish a better system to organize and fund the U.S. effort. Boulud, alongside fellow chef Thomas Keller, would go on to create the nonprofit foundation Bocuse d’Or USA, which reportedly raised more than $500,000 en route to America’s 2009 bid. Keller even converted an old house next to his acclaimed California restaurant the French Laundry into a training facility. Despite that unprecedented level of support, U.S. rep Timothy Hollingsworth, then Keller’s chef de cuisine at the French Laundry, merely managed to equal the previous American high-water mark of sixth place, set by Hartmut Handke of Handke’s Cuisine in Columbus, OH, back in 2003.

What changed in 2015? Well, the selection process, for one thing. In prior years, U.S. chefs had to prevail in a preliminary cooking contest in order to advance to the big stage in France. This time around, they had to win an essay contest. Keller acolytes Philip Tessier and Skylar Stover, both of the French Laundry, came out on top in this unusual literary semifinal. A spokeswoman for Bocuse d’Or USA explained to Nation’s Restaurant News that “the foundation wanted to spend its resources on cultivating our representatives rather than on selecting them.”

Even in the highly competitive world of cooking, it seems, there’s some truth to the old adage: The pen is mightier!