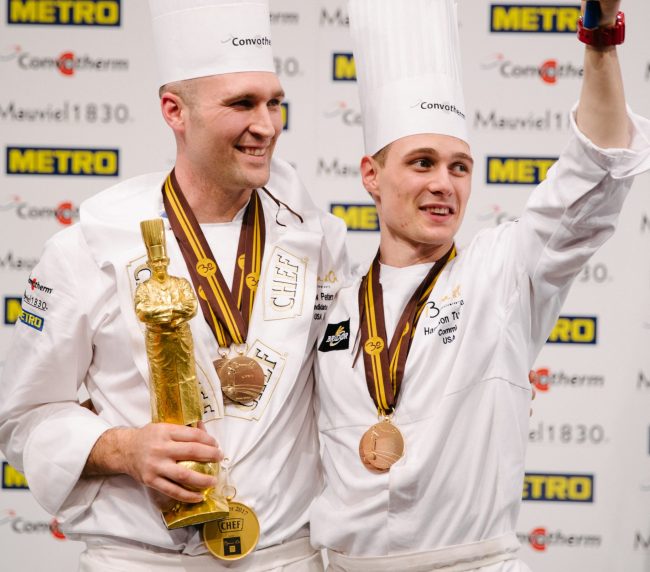 LYON, FRANCE (PRWEB) JANUARY 26, 2017
The mentor BKB Foundation proudly announces Team USA’s first gold medal win and second consecutive podium placement at the 2017 Bocuse d’Or. Over the course of the past two days, 24 teams of the most gifted culinary minds from across the world competed on behalf of their country and represented their nation at the world’s most prestigious cooking competition. Head Chef Mathew Peters and Commis Harrison Turone competed on January 25th and presented the acclaimed panel of judges with their first place interpretation of Chicken and Crayfish, and for the first time a wholly vegetal dish using only fruits, vegetables, grains and legumes.

“First of all, it is an honor to be a part of the 30th anniversary year of the Bocuse d’Or. Chef Paul Bocuse, for whom this most prestigious of culinary events is named. To coordinate the USA’s participation in Bocuse d’Or, and carry on Monsieur Paul’s legacy of mentorship, has been one of my greatest joys,” says Chef Thomas Keller, president of ment’or. “Team USA’s historic first-place finish this week is the result of years of dedication and commitment. It was Paul Bocuse’s personal wish to see the United States on the podium at Bocuse d’Or that inspired me, as well as my friends Daniel Boulud and Jerome Bocuse, to become invested. I want to acknowledge all of the chefs, coaches, supporters and mentors who have been a part of the Team USA effort—it is because of you that we are in this position. And finally, I want to thank my friend Monsieur Paul for asking me to be a part of this, and for all that he has done for USA and the culinary world in general.”

Bocuse d’Or is among the most demanding cooking challenges, and every two years 60 countries select one of their best chefs to represent their nation. The 24 countries who made it to the finals cooked for five hours and 35 minutes in front of thousands of cheering fans. Team USA is recruited, trained and funded by the ment’or Foundation, a leading nonprofit organization devoted to inspiring culinary excellence in young professionals and preserving the traditions and quality of cuisine in America. Ment’or was founded by Chefs Thomas Keller, Daniel Boulud, and Jérôme Bocuse, all of whom train Team USA along with Team USA Vice President Gavin Kaysen of Spoon and Stable in Minneapolis, MN, Head Coach and 2015 silver medalist, Philip Tessier, Assistant Coaches Mathew Kirkley of Coi in San Francisco and Robert Sulatycky of IQ Kitchen, and team advisors Brian Lockwood of The NoMad in New York City, Dave Beran of Next in Chicago, IL, Shaun Hergatt formerly of Juni in New York City, and Richard Rosendale, formerly of The Greenbrier in White Sulphur Springs, WV.

About the ment’or BKB Foundation
The ment’or BKB Foundation is a nonprofit organization that aims to inspire excellence in young culinary professionals and preserve the traditions and quality of classic cuisine in America. Ment’or is led by a Board of Directors including Chefs Jérôme Bocuse, Daniel Boulud and Thomas Keller, as well as an esteemed Culinary Council of over 40 renowned chefs nationwide who act as mentors for young chefs, serve in an advisory capacity to the organization and participate in fundraising events. Educational grants and internships are offered to young professionals through the Grants Program and a series of Young Chef Competitions for young professionals provide further opportunity to advance their careers in the culinary world. Ment’or is also responsible for recruiting, training and financially supporting the promising young American chefs who compete on behalf of the United States in the prestigious Bocuse d’Or competition, held in Lyon France, every two years.

About the Head Chef Mathew Peters
Chef Peters grew up in Meadville, Pennsylvania, and began cooking as a teenager with his family. As a senior in high school, he was inspired to cook professionally after he was captivated by the “Great Chefs of the World” TV show. At 19, Chef Peters enrolled in culinary school at Le Cordon Bleu in Pittsburgh. Upon graduation, he moved to Naples, Florida, where he worked for the Ritz Carlton in the infamous Dining Room among many other notable chefs. After years of honing his skills in Naples, he set his sights on New York City and took his first job in the city at Adour Alain Ducasse. He continued to work there until he was offered a position at Per Se in 2009. Chef Peters worked his way up from commis to chef de partie, and eventually up to sous chef. Shortly after he became a sous chef at Per Se, Chef Keller offered him the opportunity to work as a sous chef at his flagship restaurant, The French Laundry. He spent more than two years at The French Laundry, and was promoted back to Per Se as the executive sous chef in February 2012. As the executive sous chef, Chef Peters oversees and manages the staff, runs service and creates a new menu each day. His intense focus and attention to detail allows him to flourish in such a notable three Michelin star kitchen, inspiring younger cooks to do just the same.

About the Commis Harrison Turone
Harrison Turone began his culinary career in high school, where he was in a dual enrollment program earning college credit while still in high school. He soon realized that cooking was his passion and started staging at some of the best restaurants in his hometown. After high school, Commis Turone enrolled in culinary school while also working full time as an entremeitter at V. Mertz restaurant. He ultimately realized that it would be more beneficial for him to fully submerge himself into the kitchen. He left V.Mertz and staged at various restaurants in San Fransisco, until he eventually took a job at Ad Lib, The French Laundry’s temporary pop up restaurant in Napa. He recently took a commis position at Per Se.