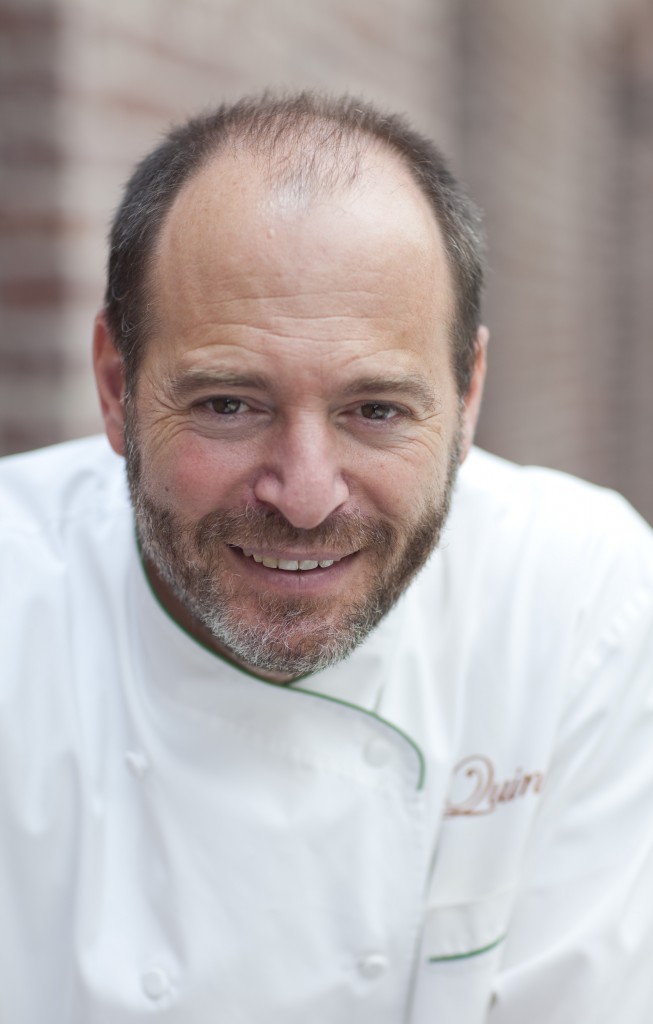 New Jersey native Michael Tusk developed a profound curiosity about food at a very young age. Michael subsequently enrolled at the Culinary Institute of American in Hyde Park, New York where he became formally dedicated to the culinary arts.

Determined to open a restaurant of his own, he and his wife Lindsay discovered a quaint corner in San Francisco’s Pacific Heights and opened Quince in December 2003. The Tusks later relocated the restaurant in 2009 to San Francisco’s Jackson Square neighborhood, which gave them the opportunity to open a second restaurant, Cotogna, adjacent to Quince.

We asked Chef Tusk about his earliest cooking inspirations and how his own cooking style has evolved.

Bocuse d’Or USA: What inspired you to start cooking?
Michael Tusk: As a kid, I loved dining out. There was a restaurant near home in New Jersey that served complimentary fried frog legs at the bar. Discovering new flavors and tastes like the frog encouraged me to start cooking.

Bocuse d’Or USA: When did you start?
Michael Tusk: In high school I worked for my cousins catering company and a local pizza place. An early crowning achievement was being elected in 9th grade Home Economics to carve the class turkey for our Thanksgiving celebration.

Bocuse d’Or USA: When did you open your first restaurant?
Michael Tusk: Quince in 2003.

Bocuse d’Or USA: What makes a great chef?
Michael Tusk: Solid communication of vision, good communication with staff and a fierce belief in the food.

Bocuse d’Or USA: How did you develop your personal cooking style?
Michael Tusk: My time spent cooking in France and Italy was transformative. I loved the flavor profiles in Italy and the elegance of French cuisine. I’ve combined those elements with the incredible ingredients found in Northern California. I remain inspired by my relationships with small, local purveyors.

Bocuse d’Or USA: How has your personal cooking style changed over the years?
Michael Tusk: It’s lighter and more refined now than it was in the past. I’m always taking trips to the farmers market to cook with peak, seasonal ingredients and snipping herbs and edible flowers from our Montgomery Hill rooftop garden.

Bocuse d’Or USA: What does “American Cuisine” mean to you?
Michael Tusk: American food is rooted in tradition, ultimately making a place what it is. It is local/regional and community driven cuisine.

Bocuse d’Or USA: Why are you a part of the Bocuse d’Or?
Michael Tusk: It brings young talent together and promotes hospitality and healthy competition. It’s an honor to represent the United States and support young culinary talent.

Bocuse d’Or USA: Why is the Bocuse d’Or competition important in the grander culinary world?
Michael Tusk: It’s the culinary Olympics! The competition is steeped in tradition and is an international gathering of extraordinary chefs. It recognizes Chef Paul Bocuse and the legends of the food world.

Bocuse d’Or USA:What advice do you have for young chefs and restaurateurs who are just getting started?
Michael Tusk: Find a good mentor. Don’t be afraid to take chances. Work in a foreign environment. Learn from chefs who’ve come before you.

Thank you to Chef Tusk for taking the time to answer our questions. To learn more about him, check out quincerestaurant.com/bios