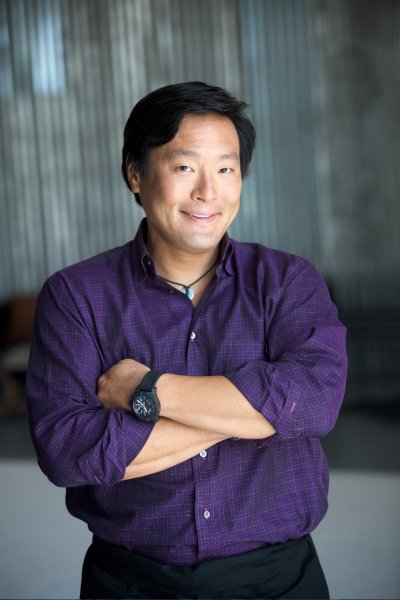 Ming Tsai’s culinary career began as a family affair in his parent’s restaurant, The Mandarin Kitchen,  in Dayton, Ohio. He studied mechanical engineering at Yale and soon moved to Paris and then Osaka to further his culinary training. In 1988, he opened Blue Ginger in Wellesley, MA to critical praise. Chef Tsai has been named Esquire Magazine‘s Chef of the Year in 1998 and Best Chef Northeast by the James Beard Foundation in 2002. In 2013, he opened his second restaurant, the 80-seat Asian gastro pub Blue Dragon.

We asked Chef Tsai about how he developed his personal cooking style and why the Bocuse d’Or is important to chefs across the globe.

Bocuse d’Or USA: Why are you a part of the Bocuse d’Or USA?
Ming Tsai: Having spent time in France and having seen [the Bocuse d’Or] in Lyon, it’s the Olympics of what [chefs] do. If you can make it and be there, you’re with some of the best chefs in the world.

Bocuse d’Or USA: Why is the Bocuse d’Or competition important in the grander culinary world?
Ming Tsai: It’s a showcase for every country to show the world where they’re at in the culinary world. It’s the one time you have all these countries getting together and competing. It really is the Olympics. The Olympics are the exact same thing. Every country gets together to show the world who is the best. There’s not a chef that I know that is not trying to be the best.

Bocuse d’Or USA: What does “American Cuisine” mean to you?
Ming Tsai: We have the best food in the world now. Now, American cuisine is basically almost every ethnic cuisine in the world.  A lot of people are now taking wherever they’re from and melding it into their own cuisine. It becomes distinctively Westernized but they are still able to stick to their roots with their techniques and flavors. American cuisine, now, is a true melting pot cuisine. You can’t say it’s just one thing.

Bocuse d’Or USA: What makes a great chef?
Ming Tsai: You have to take risks. I always say to my cooks, “You’re never going to get higher if you don’t jump for the branch.” You have to take risks and with that journey of taking risks, you’re going to fail so don’t beat yourself up. Just make sure you don’t become so arrogant that you don’t think that something is a failure and you do it anyway. You have to make sure you’re smart enough and humble enough to know when you’re jumping for the branch and you didn’t hit it. But you have to take risks. Great chefs are the ones thinking out of the box. They’re thinking about flavor combinations, textures and things that are risky because that’s the only way to find something that is truly genius.

Bocuse d’Or USA: What inspired you to start cooking?
Ming Tsai: My mom had the Mandarin Kitchen in Dayton, Ohio. I was the chef, the janitor and  the rice maker. That was significant in my career because it really got me into the business. I got the restaurant bug. I loved the whole idea that if you make good food and provide good service then you could please people and make them happy. It’s a great job to have. If you can make people happy every day, that’s a fantastic job to have.

Great chefs are the ones thinking out of the box. They’re thinking about flavor combinations, textures and things that are risky because that’s the only way to find something that is truly genius.
– Ming Tsai

Bocuse d’Or USA: How did you develop your personal cooking style and how has it changed over the years?
Ming Tsai: For me, easy question. I’m Chinese. I was born Chinese, grew up Chinese with Chinese parents and grandparents so just surrounded by Chinese food cooking in the home and going out to eat often. In Chinese culture, you all go out. The kids go out, the parents, the grandparents, everyone sits around a great big table and for those that are adventurous, you get to try a bit of everything. Not every four-year-old gets to eat jellyfish and smoked duck tongues for example. I was open to everything and I hated sitting at the “kiddie table.” I didn’t want Chicken Chow Mein. I wanted [what the adults] were eating.

I spent time in France, and obviously this is very biased, but I think the two best cuisines in the world are Chinese and French, in that order. When I started learning about French cuisine , it was just astonishing, especially when it came to the desserts and pastries. And all the things that did not exist in Chinese cuisine were just mind-blowing. I just fell in love with everything French. But even during my time at Le Cordon Bleu while in college, I thought that there was no reason you shouldn’t be blending these two cuisines. There are amazing techniques and flavors that would totally work together.

I do East/West and that means  taking the best products you have on hand and determining what will be the best technique to make the product sing. And when you can draw from not only classic French and Western techniques but Eastern techniques as well you have a great army of tools you can use to make your food sing.

Bocuse d’Or USA: What advice do you have for young chefs and restaurateurs who are just getting started?
Ming Tsai: Number one, find a mentor. Find someone that you ultimately respect and that you know you’d like to emulate. I think that’s absolutely the most key. And then, be patient. Nothing comes quickly in this industry. It’s a challenge right now. You have all these kids coming out of all these great culinary schools and if they don’t get Sous Chef of the Year, they get impatient. It took me fourteen years to become Sous Chef. Take your time. You get one wave in life. You don’t need to ride it full blast the first time. Start slowly because it’s about peaking and you don’t want to peak when you’re 24.

Thank you to Chef Tsai for taking the time to answer our questions. To learn more about him, check out ming.com.