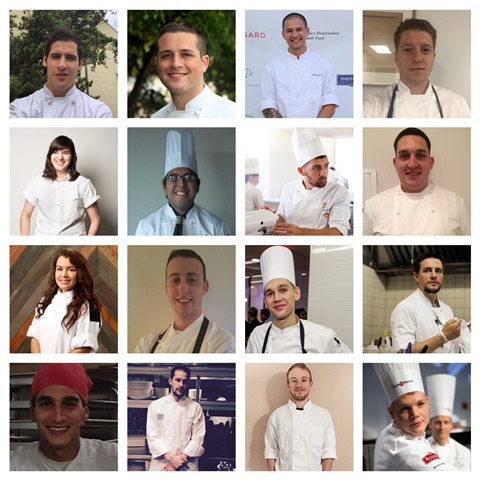 SIXTEEN YOUNG CHEFS COMPETE FOR $10,000 AND MENTORSHIP FROM CULINARY GREATS

June 18, 2015 (New York, NY) – Today, the ment’or BKB Foundation, announces the sixteen candidates who will compete in its 2015 Young Chef Competition Series. Set to kick off in Los Angeles on August 27th followed by dates in Chicago, Houston and New York City. Four chefs between the ages of 22-27 will compete in a Bocuse d’Or-style challenge, with the winning team in each city being awarded $10,000, which may be used to stage at the restaurant of their choice. The team placing second, receives $5,000.

“We established the ment’or Young Chef Competition series to identify the next generation of great chefs in America, and to give them the opportunity to further their culinary education,” said Daniel Boulud, Chairman, ment’or BKB Foundation. “We have a strong group of candidates, and are very excited to see them compete!”

“Ment’or provided me with the opportunity to express my creativity, make valuable connections and receive feedback from some of the most recognized chefs in the United States,” said Danny Sterling, Winner, 2014 Young Chef Competition Series – Miami. “Winning the Young Chef Competition has opened many doors for me, from my current stage at 42 grams to the sous chef position I will be taking this fall at Rosendale Collective.”

Boulud along with Thomas Keller and Jérôme Bocuse are spearheading the competition series as one of the ment’or BKB Foundation’s key programs. Culinary greats from the ment’or Culinary Council will be on hand in each city to judge the competition, a ticketed event with all proceeds going to support the foundation. Tickets are set to go on sale in early July via the ment’or website at www.mentorbkb.org.

To learn more about each of the competitors, please visit the ment’or Facebook page.

About Ment’Or
The ment’or BKB Foundation is a nonprofit organization that inspires excellence in young culinary professionals through three key programs, including recruitment and training for the biennial Bocuse d’Or Culinary Competition. In 2015, Team USA became the highest-ranking American team, taking home the prestigious Silver Statue. Robust educational and mentorship opportunities are offered to young culinary professionals through the ment’or Program for Continuing Education as well as the Young Chef Competition Series.

ment’or is led by a Board of Directors including Chefs Jérôme Bocuse, Daniel Boulud, and Thomas Keller as well as an esteemed Culinary Council of over forty renowned chefs nationwide. For more information please visit www.mentorbkb.org, visit us on Facebook , follow us on Instagram and Twitter @mentorbkb.