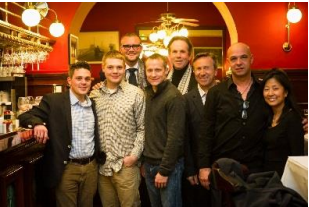 Coastal Luxury Management is honored to announce the inaugural and exclusive food and wine festival partnership with the ment’or BKB Foundation, a leading nonprofit organization devoted to inspiring culinary excellence in young professionals and preserving the traditions and quality of cuisine. Among ment’or’s many unique initiatives is the organization’s responsibility for selecting, training, and sending Team USA to compete in Bocuse d’Or, the biennial event in Lyon, France that took place January 27-28, 2015. Team USA made history by placing second and receiving the Bocuse d’Argent award for the first time ever. Considered one of the most rigorous culinary competitions in the world, 24 countries competed on the world stage during this year’s Bocuse d’Or competition.

“Team USA’s podium placement at the 2015 Bocuse d’Or competition is an extraordinary example of where the United States stands in a global conversation about cuisine and culture,” says Chef Thomas Keller, president of ment’or. “We’re looking forward to continue representing the great strides that American chefs are making at this years’ Pebble Beach Food & Wine festival.”

“Pebble Beach Food & Wine Festival is continuously striving to bring attention to the level of excellence in our culinary community,” says David Bernahl, CEO of Coastal Luxury Management. “We couldn’t be more thrilled to raise much needed funds for this great culinary program on the heels of our first ever win with Team USA!”

At Pebble Beach Food & Wine, ment’or will present Team USA for a very special evening of intimate dinners and culinary demonstrations as inspired by the prestigious biennial competition. Team USA’s Chef Philip Tessier of the Thomas Keller Restaurant Group and his Commis Skylar Stover of The French Laundry in Yountville, CA will design a menu inspired by the “Culinary Olympics” at The Imperial Dinner, the pinnacle of the four-day festival, curating a menu that will highlight what helped the Team win the silver prize at the Bocuse d’Or competition.

“It’s an honor to be selected to participate in the 8th annual Pebble Beach Food & Wine Festival,” says, Young Yun, Executive Director of ment’or. “We are always looking for different ways to introduce our Foundation to a wider audience and this unique partnership allows us to showcase our mission for inspiring culinary excellence and promoting the high caliber of cuisine and talent we have in America.”

Pebble Beach Food & Wine, presented by FOOD & WINE continues its 8th year at Pebble Beach Resorts, one of the country’s premier destinations, bringing together the world’s most revered culinary talent for three nights and four days of epicurean excellence. Attendees are invited to explore the three world-class resorts including The Inn at Spanish Bay, Lodge at Pebble Beach, and Casa Palmero, where more than 100 celebrity chefs and 250 wineries come together to showcase a dynamic weekend of exceptional dinners and chef collaborations, Grand Tastings, and cooking demonstrations featuring the industry’s leading experts and most coveted restaurants in the world.

Other Pebble Beach Food & Wine event highlights include “An Evening at Maude” as celebrated chef and culinary personality Curtis Stone transports the flavors, aromas, and essence of his first-ever Los Angeles restaurant to Pebble Beach; join Master Sommeliers and winemakers for unprecedented wine tastings with Chateau Margaux, Domaine Faiveley, Kosta Browne, and Penfolds Grange. Meat purists will enjoy a whole-animal “Meatopia” marquee event co-produced by Esquire Magazine’s Josh Ozersky while others will get ready for cooking demonstrations with the likes of Iron Chef Jose Garces, Dana Cowin, or Iron Chef Masaharu Morimoto as he pays homage to the quintessential comfort food–Ramen 101. Additionally, the Lexus Grand Tasting, an annual favorite, will host one of the greatest lineups of wine and culinary talent since its inception in 2008.

The weekend at Pebble Beach Food & Wine would not be complete without the celebrity chef and winemaker golf tournament or afternoon lunch with distinguished winemakers set merely steps from the pristine Pacific coastline. Executed with taste, sophistication, a touch of edge, nationally celebrated culinary talent combined with up-and-coming chefs to watch in 2015, will celebrate flavors from around the globe in unique and unexpected ways for those in attendance to savor and relish.

Major partners for this year’s event will include FOOD & WINE, Lexus, The Cosmopolitan of Las Vegas, as well as more to be announced. Tickets or gift certificates are now available and may be purchased a la carte or as a weekend package, with prices ranging from $100 to $4,750 for a VIP, all inclusive four-day pass including Lexus transportation and access to exclusive celebrity chef and winemaker after-hours parties. Three total weekend packages are available. Tickets can be purchased at: http://www.pbfw.com/.

ABOUT COASTAL LUXURY MANAGEMENT, LLC:
Coastal Luxury Management, LLC (CLM), co-founded and managed by David Alan Bernahl II, creates unique experiential opportunities in the hospitality, entertainment, restaurant, and event sectors. In addition to being named one of Inc. Magazine’s “Top Food & Beverage Companies” in 2012 and 2013, CLM has also been included in the annual Inc. 500/5000 ranking of the fastest-growing privately owned companies in the United States for the past two years. CLM produces Pebble Beach Food & Wine and the Los Angeles Food & Wine Festival, both known for bringing together the highest caliber of culinary and wine talents to create once-in-a-lifetime experiences. CLM’s catering division, Coastal Luxury Catering, combines the company’s restaurant and event divisions to offer full-service event planning and catering services for a variety of social, corporate, and non-profit events throughout the country. CLM’s restaurant division includes: Restaurant 1833, named one of Robb Report’s 2012 “Best of the Best” and a James Beard Foundation 2012 “Best New Restaurant” nominee; Cannery Row Brewing Company, home to one of the largest draft and bottled craft beer selections in Central California; and the recently opened Downtown Los Angeles restaurant, Faith & Flower, an Esquire magazine 2014 “Best New Restaurant” recipient. In the winter of 2013, through their continued partnership with hospitality entrepreneur Charles Banks, CLM launched Vessel, their newest endeavor aimed towards redefining the way people dine. Vessel offers a highly curated selection of glassware and tabletopaccessories sourced from across the globe for retail consumers and restaurant venues. For more information about Coastal Luxury Management, please contact media@clm-ca.com.

ABOUT PEBBLE BEACH FOOD & WINE:
The Eighth Annual Pebble Beach Food & Wine (April 9-12, 2015) continues as the signature West Coast culinary event, with more than 100 prominent chefs and 250 acclaimed wineries and distinguished winemakers from around the world coming to the iconic Pebble Beach Resorts in Pebble Beach, CA for a four-day first-class display of epicurean splendor and unrivaled access. In addition to cooking demonstrations led by the most talented chefs from around the globe and vertical tastings from the world’s top wine producers, unique experiences added each year make this a must-see annual event for culinary enthusiasts and wine aficionados the world over. PBFW is the exclusive food & wine festival partner of ment’or and Team USA, whereby charitable dollars are raised at each event to support this great program. For more information on Pebble Beach Food & Wine, please visit www.pbfw.com or call 1-866-907-FOOD (3663).