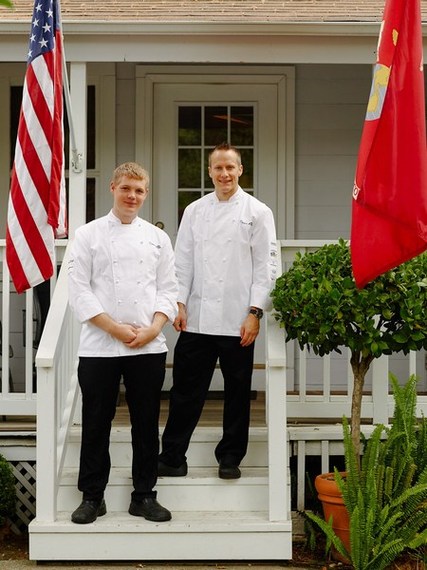 Before Top Chef, MasterChef and the million other cooking competitions running on TV, there was only one battle for culinary supremacy that truly mattered: the Bocuse d’Or. The Olympics of the culinary world was created in 1987 by legendary chef Paul Bocuse as a way to combine the glory of live sporting events with the masterful tradition of French cooking. Over the course of two days, 24 nations go head-to-head (to-head-to-head-to-head) in a five-and-a-half-hour test of technique, creativity and sheer stamina for the honor of taking home a tiny trophy shaped like a French guy. The competition begins today and wraps up Wednesday evening (Lyon time). You can follow all the action on the livestream (Update: the livestream returns tomorrow at 3 a.m. EST.)

Every two years, duos from all over the world compete to represent their country in Lyon – home of the now 88-year-old Bocuse (named Chef of the Century by the Culinary Institute of America) and unofficial capital of the gastronomic world. Great chefs have been coming out of Lyon for a century, from Eugénie Brazie to the brothers Troisgros to Daniel Boulud, so it only makes sense to hold the contest there. Although it started as a somewhat sedate affair, the event is now a sort of Foodie World Cup, with chanting, cheering and raucous nationalism erupting regularly in the Eurexpo/SIRHA Chef’s Arena. This shift in atmosphere came about thanks in part to the 1997 Mexican team, who – no joke – brought a mariachi band to cheer them on.

The Bocuse d’Or isn’t some kind of quick-fire challenge, where chefs have to make a burrito out of ingredients found in a vending machine. It’s a competition that doubles as a tribute to the history of French cuisine, which means two designated proteins prepared in the most elaborate way possible.

Teams are judged on quality, presentation, teamwork, cleanliness and lack of waste. Unlike those TV cooking shows, there are no major surprises here when it comes to ingredients. Teams found out that they’d be cooking guinea fowl back in September; the fish, brown river trout, was announced in December. That means the participants have been able to create, design and perfect their dishes for months. As chef Phil Tessier of Team USA says, “This is like a gymnast or a figure skater. Maybe you can do a triple jump or 16 backflips in a row, but then you have to put it into a program where it all fits together.”

Tessier, executive sous chef at the French Laundry and longtime Thomas Keller disciple, will be competing with his commis, Skylar Stover, chef de partie at the French Laundry. In past years, the selection process for Team USA has been comparable to the Olympic trials: Hopeful chefs compete in regional competitions until the final team is selected. Not this year. For 2015, Ment’or BKB, the organization that picks Team USA, decided to save its financial resources and focus them all on training. That meant a straight application process for the chefs, and the selection of two French Laundry toques comes as no surprise – the K in Ment’or BKB stands for Keller, the group’s president (the two Bs represent chairman Daniel Boulud and vice president Jerome Bocuse, son of Paul).

So do the Americans have a chance of winning this thing? At the very least, they’re hopeful. “We have a humble confidence,” says Tessier. “We wouldn’t do it if we didn’t think we were going to [win].”

History isn’t on their side, though. Since first entering the competition in 2009, the Americans have only placed as high as sixth. This year, the competition promises to be just as stiff. Tommy Myllymäki (silver in 2011) is back representing Sweden, and the Scandinavian countries (Norway, Sweden and Denmark) are considered favorites after placing in the top three every year since 1991. The French can’t be counted out – they’ve won the gold seven times, and they’re technically the home team – while the Japanese are climbing in stature after placing third in the 2013 games.

On Tuesday, history won’t mean a thing. About 2,500 fans (including me) from five different continents will descend upon Lyon, and whichever nation can present the best guinea fowl/brown trout platters of their entire lives will earn the food world’s highest honor. Will France take home a record eighth title? Can first-time entrants Chile get near the podium? Will the Americans finally taste glory? I’ll be in Lyon to answer all of these questions, and we’ll know the results on Thursday. Until then, may the best trout win.

Update: Jason Kessler reports from Lyon. “Team USA just presented at 9:30 a.m. EST. Buzz is very strong. A Michelin-starred chef told me he thinks the Americans were the best of the day. I agree. And that’s including the French who also went today.”