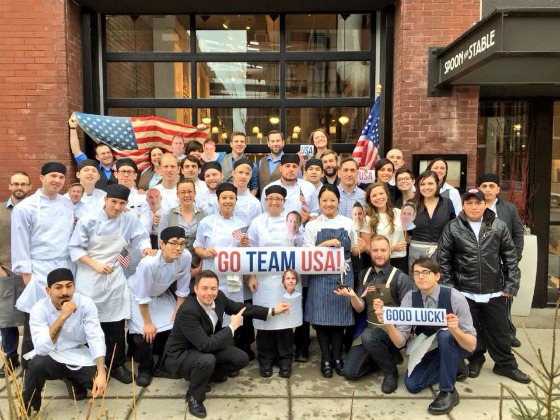 Remember when Mary Lou Retton took gold in the Olympics and she was all over the Wheaties boxes and she just absolutely stole America’s heart?

Well, this may not be quite as exciting as that, but it’s pretty dang exciting. If you like food, and you must or you wouldn’t be reading this, its sort of like we’ve got our own Olympian doing culinary gymnastics all over town.

We already knew that Spoon and Stable’s Gavin Kaysen was a pretty big deal, but he and his culinary team (he was a coach this year) just took the silver medal at the Bocuse d’Or, the culinary olympics of the world.

And it’s the first time that America has medaled, which is a pretty big, big deal as far as the world culinary stage is concerned.

We interviewed Kaysen a few weeks ago to find out what the competition entails, and he told us about grueling training and months of preparation. He competed in 2007 but didn’t place. Traditionally, the US hasn’t done well in the competition — this year is the first year that America placed higher than sixth — so there has been a push to increase training efforts and standards.

Kaysen and the other coaches guided competitors Philip Tessier and commis Skylar Stover (both of The French Laundry) to silver medal victory.

The news comes one day after MSP Magazine Food Critic Dara Moskowitz called Kaysen’s cooking akin to that of a promising sous chef:

“If that were the context I’d think: This kid shows lots of promise; he really can cook; he is one to watch! Is that, in the context of Kaysen’s career, a withering insult?”