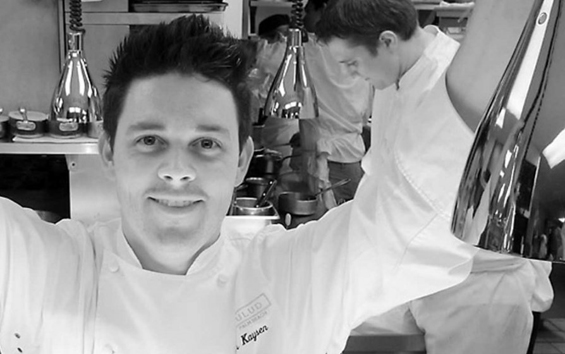 The training starts months in advance. Every two years, the world’s finest chefs converge on Lyon, France, to duke it out in starched whites for the culinary equivalent of the Olympic gold medal. The training involves daily physical workouts, leaving home restaurants behind for weeks at a time, and living in Lyon to get accustomed to the culture, the language, even the weather.

Why bother? For winners, it can be life-changing. “It can mean everything for your career — the kinds of things you only dream about,” says local chef célèbre Gavin Kaysen of Spoon and Stable. This year he’ll be coaching the next Bocuse d’Or hopeful from the U.S.

Kaysen himself was the chosen chef (every country sets its own standards for how a chef gets selected; sometimes they compete for the honor, other times they compete to compete) to represent America in 2007. He didn’t win — the French and the Scandinavians tend to do very well, the French having taken three of the last five titles, the others claimed by Denmark and Norway.

In fact, traditionally, America has not done well in the competition, despite our high quality of chefs and cuisine. The competition is televised all over Europe and is considered a spectator sport, yet Americans hardly register it.

Something needed to change, so in 2008 “Ment’or” was formed, a support system for competing chefs from the United States. With chef Daniel Boulud at the reins, support has taken the form of a house set aside next to the French Laundry specifically designed for training sessions, a storage space in Lyon with enough equipment to open a restaurant, and a scholarship fund.

Training and preparations are the stuff of real Olympians; for instance, when Kaysen learned that the protein he would be tasked with presenting was Bresse chicken, he was forced to move to Lyon to train. The product has appellation d’origine contrôlée status and could not be exported to the U.S. His commis had to come along, naturally, but could not afford to pay rent back home, so Kaysen paid him out of his own paycheck.

“You have to get up at the same time every day and do the same workout routine because it’s very important for the physical stamina. During the competition you can’t stop moving for five and a half hours. And, your body physically tastes things differently when you’re under that much stress, so we literally have to weigh everything out, down to the salt and pepper.”

Kaysen’s team of co-coaches includes the heaviest hitters in the industry: Daniel Boulud, Thomas Keller, Grant Achatz of Alinea to name only a few.

This year’s competition takes place on January 27 and 28, and Kaysen will be leaving his fledgling local restaurant, Spoon and Stable, behind for 10 days. Is he nervous? Not really. “There’s 76 people who work in this restaurant and they are very competent. It’s not just me.”