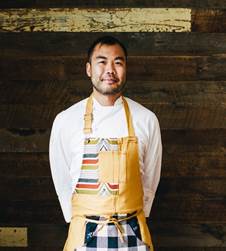 On Wednesday, January 14, Williams-Sonoma in New York City’s Columbus Circle invites guests to a culinary event to benefit Team USA before they journey to the 2015 Bocuse d’Or in Lyon, France

WHAT:          On Wednesday, January 14, guests are invited to enjoy an unforgettable evening of wines, delectable bites, and a live cooking demonstration from acclaimed Chef Paul Qui of qui and East Side King in Austin, TX. Taking place at Williams-Sonoma in New York City’s Columbus Circle, the $75 per person ticket price benefits the 2015 Bocuse d’Or Team USA.

The event at Williams-Sonoma Columbus Circle is the second in the Road to Lyon series which benefits Team USA, comprised of Chef Philip Tessier and Commis Skylar Stover of The French Laundry, on their journey to compete against 24 countries on behalf of USA at the Bocuse d’Or in Lyon, France. Team USA is recruited, trained, and funded by the ment’or BKB Foundation, a leading nonprofit organization devoted to inspiring culinary excellence in young professionals and preserving the traditions and quality of cuisine in America. Ment’or was founded by Chefs Thomas Keller, Daniel Boulud, and Jérôme Bocuse. Qui is one of the esteemed chefs who sits on the ment’or Culinary Council.

About the ment’or BKB Foundation

Ment’or is a nonprofit organization that aims to inspire excellence in young culinary professionals and preserve the traditions and quality of cuisine in America. Ment’or is led by a Board of Directors including Chefs Jérôme Bocuse, Thomas Keller, and Daniel Boulud, as well as an esteemed Culinary Council of over forty renowned chefs nationwide who act as mentors for young chefs, serve in an advisory capacity to the organization, and participate in fundraising events. Educational grants and internships are offered to food, beverage, and service professionals through the Program for Continuing Education. A series of Young Chef Competitions offer yet another opportunity for young professionals to further their careers in the culinary world. ment’or is also responsible for recruiting, training, and financially supporting the promising young American chefs who compete on behalf of the United States in the prestigious Bocuse d’Or competition, held in Lyon France, every two years.

The ment’or BKB Foundation has selected Chef Philip Tessier and Commis Skylar Stover of The French Laundry in Yountville, CA, to represent the U.S. at the Bocuse d’Or World Cooking Contest in 2015. “I’m honored to be representing American cuisine on the world stage. With the support of ment’or, the Board, and our coaches behind us, we’re preparing for the greatest culinary competition with the most gifted minds in our profession,” Tessier says. Former Bocuse d’Or competitor and Team USA Head Coach Chef Gavin Kaysen of Spoon and Stable in Minneapolis, MN guides Tessier and Stover, along with Coaches: Chefs Grant Achatz of Alinea and Next, Chicago; Gabriel Kreuther, formerly of The Modern, New York; and Richard Rosendale, formerly of The Greenbrier, White Sulphur Springs, WV; as well as the Foundation’s Board of Directors.

Paul Qui is the recipient of the James Beard Foundation Award for Best Chef: Southwest 2012, winner of Top Chef Season 9, and winner of the San Pellegrino Cooking Cup 2013. Paul was named one of Food & Wine magazine’s 2014 Best New Chefs and Top 10 Empire Builders of 2012. In 2013, Paul was honored by the Texas Legislature for his work and achievements as a chef and restaurateur, and also joined the prestigious ment’or BKB Foundation Culinary Council (formerly Bocuse d’Or USA). Born in Manila, Philippines and trained in classic French and Japanese cuisine, Paul takes a modernist approach towards food, where there are no boundaries. Starting as an intern, Paul worked his way up the ranks of Uchi to Chef de Cuisine and later opened Uchiko as Executive Chef. While training under Uchi Chef and Owner Tyson Cole, Paul learned to adapt traditional Japanese dishes with an eye towards local flavor, all while incorporating influences from South East Asian and European cuisine. Paul is currently the chef/owner of his flagship restaurant, qui, which received the honor of Best New Restaurant In America, 2014 by GQ magazine. He is also the co-founder and chef/owner of East Side King, a group of Asian-inspired street food trailers and restaurants in Austin, TX. East Side King Thai-Kun was named one of Bon Appétit magazine’s Best New Restaurants in America 2014.

Since its founding by Chuck Williams in 1956, Williams-Sonoma has been bringing people together around food. As the leading specialty retailer of high-quality products for the kitchen and home, the brand offers world-class service and an engaging customer experience. Products include cookware, cooks’ tools, cutlery, electrics, bake ware, tabletop and bar, outdoor, homekeeping, a library of cookbooks, as well as furniture, decorative accessories, lighting, wall decor and rugs for the kitchen and home. A specialty food hall provides a range of distinctive food items, from pre-prepared foods and mixes to spices and sauces that enhance the culinary experience. Each Williams-Sonoma store features a professional demonstration kitchen for visiting chefs, cooking classes and tastings, all conducted by expert culinary staff. A comprehensive gift registry program for weddings and other special events is available in the stores and online. For more information, please visit: www.williams-sonoma.com.