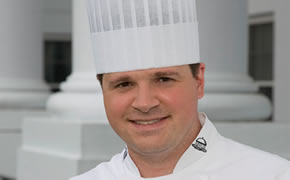 We last spoke with Chef Richard Rosendale just after he returned from competing in the international Bocuse d’Or culinary competition in early 2013. At the time he was the executive chef of iconic The Greenbier (White Sulfur Springs, WV.)

Since then he’s gone out on his own and can be seen Saturday mornings on CBS’ “Recipe Rehab.” His new catering company will serve Washington, D.C. in 2015.

He’s also a coach for Team USA for the upcoming Bocuse d’Or competition in Lyon on January 24, 2015. We talked with Richard about Team USA’s (Chef Philip Tessier and Commis Skylar Stover of The French Laundry) chances for 2015 and what it takes to compete on the world stage in this prestigious and rigorous international competition (24 countries competing) known as the “Olympics of Cooking.” It’s an intense five and a half hour cooking challenge with thousands of cheering fans watching.

Chef Richard also highlighted his volunteer work as a member of the Culinary Council for the ment’or BKB Foundation (previously known as the Bocuse d’Or USA Foundation.) It’s a nonprofit organization that aims to inspire excellence in young culinary professionals and preserve the traditions and quality of cuisine in America. Its Board of Directors includes Chefs Jerome Bocuse (Paul’s son,) Thomas Keller and Daniel Boulud.