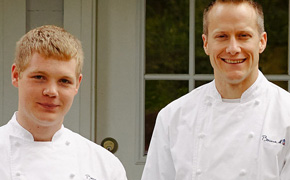 Chef Philip Tessier and his young Commis, Skylar Stover, of Thomas Keller’s The French Laundry in Yountville, CA are going for the gold in 2015. The pair is the newest Bocuse d’Or USA Team, representing the nation at the World Cooking Contest in Lyon, France on January 27th and 28th. Often described as the “Culinary Olympics,” the Bocuse d’Or (staged every other year) is among the most demanding international cooking competitions, pitting chefs from twenty-four countries against one another in an intense five and a half hour cooking challenge in front of thousands of cheering fans.

A contribution of any size to support Team USA in Lyon is greatly appreciated by their support group, ment’or BKB Foundation.